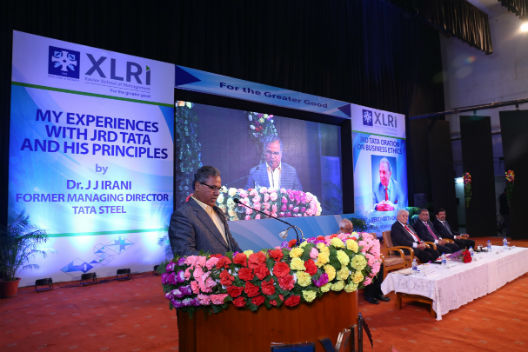 Padma Bhushan, Dr. Jamshed Jiji Irani, Eminent Industrialist and Former MD, Tata Steel delivered the oration this year at XLRI Campus on November 29th, 2017. In his speech, Dr. Irani spoke about ‘My Experiences With JRD And His Principles’- which was the topic of the oration.

In the oration, Dr. Irani gave instances of his personal conversations with JRD Tata and his observations of the great visionary. He said in his speech, “J R D always believed that before one could excel in his chosen sphere, that person should be a “good man”. And a good man must have great credibility. He was always very sympathetic towards the needy, and there are umpteen anecdotes on how he helped families, and particularly children.”

“J R D always said that before India becomes a “great” country, he would like it to be a “happy” country. He tried to convey that view even to Jawaharlal Nehru who was his friend,” he said in his address.

Recounting JRD Tata’s words, he said, “J R D’s mantra was to always aim for Excellence, or even Perfection, and never should one be satisfied with mediocrity. That drive was clearly reflected in his leadership of Air India. When J R D was the Chairman, Air India was recognized as one of the top three airlines in the world.”

Dr. Irani observed in his speech, “J R D believed that every company has a special continuing responsibility towards the people of the area in which it is located and in which its employees and their families live. In every city, town or village, large or small, there is always need for improvement, for help, for relief, for leadership and for guidance. I suggest that the most significant contribution organized industry can make is by identifying itself with the life and problems of the people of the community to which it belongs, and by applying its resources, skills and talents, to the extent that it can reasonably spare them to serve and help them. Let industry established in the countryside ‘adopt’ the villages in its neighborhood; let some of the time of its managers, its engineers, doctors and skilled specialists be spared to help and advise the people of the villages and to supervise new developments undertaken by co-operative effort between them and the company. Assistance in family planning in the villages would be a particularly valuable form of service. None or little of this need be considered as charity. While no doubt some free services and financial relief may at times be required, most of such activities could and should be in the form of co-operative self-help ventures between the company and the people of the villages. The benefits of such a joint venture will no doubt initially flow chiefly to the village, but it is also clearly in the interests of industry that surrounding areas should be healthy, prosperous and peaceful. Pillars of prosperity cannot survive in a sea of poverty.”

In his welcome address, Fr. E Abraham, S. J. Director of XLRI said, “We have organized the Annual JRD Tata Oration on Business Ethics today, 29th November as it marks the 25th death anniversary of Mr. JRD Tata – the great visionary leader of not only the Tata Group, but rather, the Indian industry as a whole. We are privileged to have Dr. Jamshed Jiji Irani, Former MD, Tata Steel, our speaker for this evening.”

“XLRI has always underscored on the importance of adopting an ethical code of conduct within the corporate world. We believe that no management education curriculum is really complete, unless and until the students are instilled with a set of values that are necessary decision-making ingredients for the corporate manager today. It is for this reason that a core course on “Managerial Ethics” is offered to all our students at XLRI. In 1991, XLRI in association with a few select Tata Group Companies established the XLRI-JRD Tata Foundation in Business Ethics to mark their long-standing commitment and contribution to business ethics in India. The Foundation seeks to address itself by publicly affirming the imperative need for ethics in business and striving to shape an enabling eco-system to foster ethical practices in business. The annual JRD Tata Oration on Business Ethics is an event that has been of singular significance to us, ever since it was initiated in 1991. Mr. JRD Tata, himself a role model extraordinary, as the first orator, set the gold standard for the successive Ethics orations for over two decades. We at XLRI have been truly privileged to have had distinguished speakers from different realms to visit us here in Jamshedpur and share with us their thoughts and experiences in the field of business ethics and many other walks in life,” Fr. Abraham added.

“Globalization has further enhanced the ethical issues in business. Corporations have entered a new era, the “prove to me” era. There is an increasing expectation from stakeholders for businesses not only to say they are ethical, but to prove they have ethical values embedded throughout their organisation. Globalization means that business strategy and business ethics cannot be separated from each other. The culture of an organization is established by the tone set at the top. Chief executives must lead by example,” Fr. Abraham further said in his address.

On the occasion, Fr. Abraham also announced that XLRI would also release a book to mark the joyous accomplishment of 25 years of JRD Ethics Oration. The book, which is an anthology of all the brilliant orations delivered by esteemed orators over the 25 years beginning with Mr. JRD Tata himself.