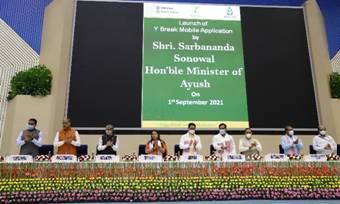 New Delhi: In a glittering ceremony that reflected the whole government approach of PM Modi and saw the participation of his six cabinet colleagues, Union Minister of Ayush Sarbanand Sonowal launched the ‘Y-Break’ mobile application at Vigyan Bhawan on Wednesday.

One of the ministers appreciated the efforts of the Ministry of Ayush in developing this mobile application and said it will “spread like a wild fire”.

The five-minute Yoga protocol, especially designed for working professionals to de-stress, refresh and re-focus at their workplace to increase their productivity, consists of Asanas, Pranayam and Dhyana.

Listing the benefits of Yoga, Shri Sarbananda Sonowal said, “We know that the corporate professionals often experience stress and also physical problems due to their occupation. Of course, the other professions are also not exempted from such problems. Keeping in view the working population this Y-break has been developed, which will give the employees some solace at the workplace. This Y-break, if practiced sincerely, is going to play a major role in the maintenance of the health of the people.”

Talking about the recognition of Yoga worldwide, Shri Sonowal said, “Yoga is now popular world-wide. It has reached almost every part of the globe. People practice Yoga, in some form or the other, is beneficial for spiritual or health purposes. The philosophy behind the ancient Indian practice of yoga has influenced various aspects of how society in India functions, whether be in relation to areas such as health and medicine or education and the arts.”

Speaking on the occasion, Dr Munjpara Mahendrabhai, said, “You all have seen for yourselves how efficacious Yoga Break App is and how much research and experienced thought have been put in its preparation. It has already stood robust trials, testing its deliverables. Its impact on our various Koshas has also been talked about.”

“The launch of this Y- Break application will bring awareness about different Yoga practices and help the masses to practice Yoga anytime with ease,” he added.

Smt. Meenakshi Lekhi said, “The Y-Break app can significantly contribute in achieving the sustainability for mankind.” She added that the ‘Y-Break’ app will prove a big contributor in reducing stress in our lives.

Dr. Jitendra Singh, Minister of State (I/c) Science &Technology and Earth Science said, “We are using digital technology in promoting Yoga is really worth appreciating. I urge Union Law Minister to enact a law on Yoga for 5 minutes at the workplace so that people can take advantage of it.”

Shri Kiren Rijiju, Minister of Law and Justice, said, “Ayush Ministry is propagating Yoga in very simple ways, which is quite commendable and I am sure that the Y-break App will spread like a wildfire.”

The launch was a part ‘Azadi Ka Amrit Mahotsav’, a series of events organised by the Government of India to celebrate 75th Year of Independence. The Ministry of Ayush has been allotted one week from 30th August to 5th Sept 2021 for promotion of several activities of Ayush including the launch of Y-Break, organizing camps for school for Ayush systems, launch of Ashwagandha as prophylactic medicine, and distribution of medicinal plants for farmers and public.

The programme also witnessed a synchronised and impressive display of Yogasana by all dignitaries, including the ministers present at the venue. They performed the five-minute Yoga protocol as given in the mobile application. Several dignitaries connected remotely including senior officials of various government departments, autonomous organisations, members of industry bodies such as ASSOCHAM, CII and FICCI, officials of Yoga and Naturopathy Institutions, Universities and Yoga Centres abroad, Yoga Practitioners, Scholars, Policy Makers, Bureaucrats, Yoga Enthusiasts and Experts of Allied Sciences.

The Yoga protocol in the Y-Break application comprises of a few simple Yogic practices as follows:

This module was launched in January, 2020 as a pilot project basis in six major Metro cities in coordination with different stake-holders. A total of 15 day’s trial was conducted by Morarji Desai National Institute of Yoga in collaboration with six leading Yoga Institutes of the country, wherein total 717 participants from different Private and Government bodies participated and the trial was a huge success. The feedback of the protocol is very encouraging.