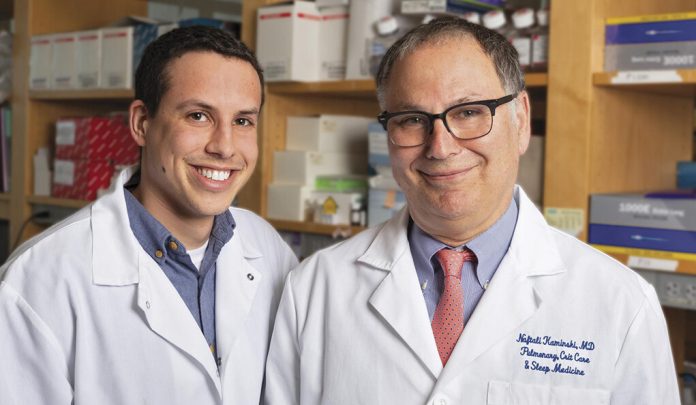 A research team from Yale and Baylor College of Medicine has completed the largest single-cell analysis to date of lungs affected by Idiopathic Pulmonary Fibrosis (IPF), revealing how cells change in response to the disease and identifying previously unknown cell types. The findings, published in the July 8 issue of Science Advances, deepen understanding of IPF and could improve treatment of it and other fibrotic lung diseases.

Using a technique called single-cell RNA sequencing, which allows scientists to profile in detail thousands of individual cells, the research team created a high-resolution atlas of all the cells in lungs with IPF. It is available online the Idiopathic Pulmonary Fibrosis Cell Atlas.

The new research provides insight into the lungs’ cellular landscape, shows how IPF affects lung cells, and suggests both a possible explanation for patients’ breathing difficulties and potential new avenues for treatment.

IPF is a disease characterized by progressive scarring of lung tissue and increasingly labored breathing. There are some 50,000 new cases in the U.S. each year, according to the Pulmonary Fibrosis Foundation. While the cause of IPF is uncertain, a history of smoking and certain genetic predispositions are known to contribute to susceptibility.

The team, which analyzed 79 human lungs and 330,000 cells, also identified cell populations involved in the scarring process that had not previously been seen in the human lung.

These changes were prominent in the cells that form the lining of the alveoli.

The team also discovered a new cell type they call “aberrant basaloid cells,” said Taylor Adams, a research assistant in Kaminski’s lab and first author on the paper. These cells, involved in scarring, were found in a lung region long considered the leading edge of lung fibrosis.

The larger picture of cell movement and new cell populations resulting from IPF supports a theory Kaminski first proposed over a decade ago — that lung fibrosis is not merely scarring but “an active process of repair, almost like out-of-context lung development.”

Kaminski said his research program, including the most recent study, points to lungs trying to rebuild by replacing cells lost to the disease.

“I think IPF is abnormal repair,” he said. “It’s as if there were a small pothole and someone started building bridges and highways around it.”

This understanding, he added, is key to knowing how to treat the disease. “By better understanding this aberrant repair,” he said, “we may be able to stop it, and maybe even better guide it.”

The research was funded by the NIH National Heart, Lung, and Blood Institute and Three Lakes Partners, a nonprofit organization dedicated to accelerating progress in IPF research. Additional research partners include Brigham and Women’s Hospital, and the drug company NuMedii.

“It was an amazing collaborative effort,” said Rosas, co-senior author on the paper and chief of pulmonary, critical care, and sleep medicine at Baylor.