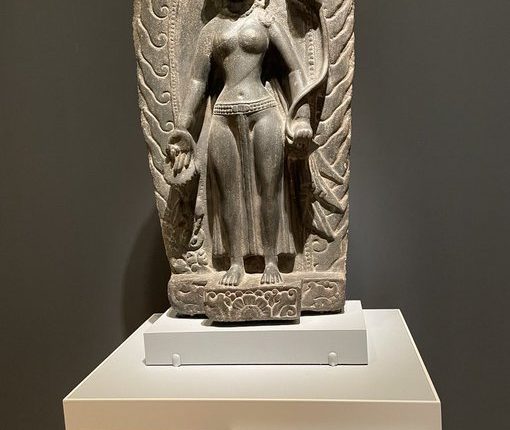 By India Education Diary Bureau Admin On May 10, 2022
Share

The Yale University Art Gallery has announced the transfer of an object from its permanent collection, Buddhist Goddess Tara (Yale University Art Gallery accession no. 2015.16.3), to the Government of Nepal (Department of Archaeology, Ministry of Culture, Tourism, and Civil Aviation). The Consul General of Nepal in New York received the object on behalf of the Government of Nepal, and the sculpture will be transported to Kathmandu.

Acting Consul General Mr. Bishnu Prasad Gautam thanked the Gallery for its support and cooperation in the repatriation of this artwork. “We truly appreciate the Gallery’s collegiality regarding the research leading to the return of the Buddhist goddess Tara/Parvati. On behalf of the Government of Nepal, I want to express my gratitude to the Gallery’s Director, Governing Board, and curatorial team. Their thoughtful collaboration and commitment to addressing cultural patrimony issues will help Nepal preserve its history and culture and also support the national efforts to recover and reinstate the lost cultural properties,” said Consul General Gautam.

The argillite stone sculpture dates to the late ninth to early tenth century C.E. and was donated to the Gallery in 2015. Research conducted in early 2021 by the Gallery’s Curator of Provenance Research and Department of Asian Art showed that the sculpture had been reported as missing from the Bir Bhadreshwor Mahadev Temple, Golmadhi Tol, Bhaktapur, Nepal. During the course of research, the Gallery was contacted by the Consul General of Nepal in New York about the object, and in summer 2021 Gallery staff met with the Acting Consul General. Continued research on the sculpture conducted by the Gallery and the Department of Archaeology in Kathmandu confirmed that the sculpture had been installed at the Bir Bhadreshwor Mahadev Temple until at least 1976, where it was worshipped as the Hindu goddess Parvati in daily ritual.

“The Yale University Art Gallery is committed to the ongoing study of artworks in our collection and to proactively responding to new information as it becomes available,” said Stephanie Wiles, the Henry J. Heinz II Director. “The decision to deaccession the sculpture was a collaborative one, and we are grateful to the Consul General of Nepal in New York and the Department of Archaeology in Kathmandu for assisting us in completing the research that led to the return of this sculpture to Nepal.”

India Education Diary Bureau Admin May 10, 2022
The Yale University Art Gallery has announced the transfer of an object from its permanent collection, Buddhist…