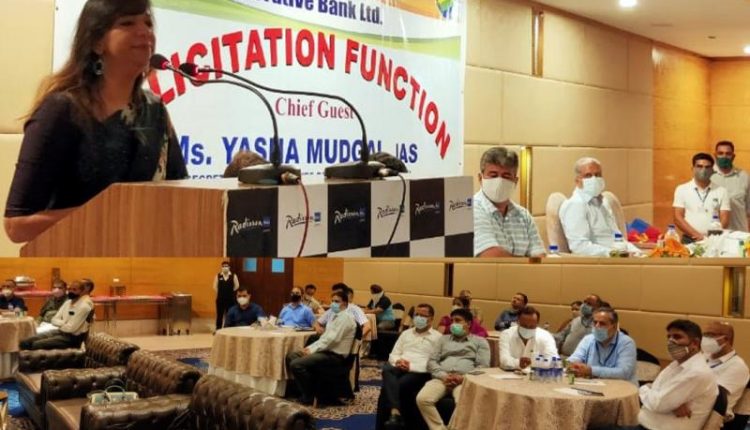 “The Cooperative Banks over the years have evolved into banking institutions who have not only boosted the primary sector economy but played a great role in bringing social transformation and financial inclusion”, maintained Yasha Mudgal while appreciating CCBL for steering the Institution towards rapid progress.

Managing Director of the bank, Rajesh Tandon, highlighted the objectives and role of the Bank in the service of urban banking to Jammuities. He stated that bank came into existence in the year 1978 with its 1st Branch-cum Head office at Moti Bazar which later attained growth to 11 branches and 4 Extension Counters with independent Head Office-cum-Administrative Office.

He also apprised that the bank at present is under the management and control of Board of Administrators headed by its Chairperson, Dr. Arun Manhas, along with three members including Rajneesh Mahajan, Assistant Vice President J&K Bank, Rajat Mengi, CA and Deepika Mahajan, Senior Advocate.

The Bank for the last four decades has catered to the needs of its clients and depositors by extending financial assistance for several works like construction of houses, purchase of vehicles, expansion of Trade & Commerce including establishment of Industries and SSI units.

Speaking on the occasion, Dr. Arun Manhas, Chairman CCBL stated that the bank is CBS compliant which is extending all financial services including RTGS, NEFT, Rupay Debit Card, POS Machines , E-Com and related facilities to its clients. Hence, in the era of digital payment, the Citizens’ Cooperative Bank Limited Jammu is playing vital role and extending services in facilitating its clients to make purchases by swapping Rupay Card on all the POS Machines anytime and anywhere in the country.

Dr Manhas stated that apart from all these services and facilities to its clients, the bank is also fulfilling number of parameters prescribed by RBI.

Accordingly, Dr. Manhas apprised the Secretary that the CCBL is in dire need of financial assistance and subscription of share capital from Government to come out of obstacles for smooth functioning of the bank. In this regard, the Bank has submitted a comprehensive proposal to the concerned authorities in the year 2016 which was the outcome of decision taken in 19th TAFCUB meeting held at RBI Jammu.

Later, Yasha Mudgal extended congratulations and presented mementos to the top Achiever Branches and assured that all possible steps shall be taken up by the department to extend necessary financial assistance for smooth functioning of CCBL.

Yasha assured to take up the issue of Share Capital with the authorities at the earliest. She informed that the matter regarding compliance to provisions of Banking Regulation Act 1949 with regard to disposal of non-banking assets and also to improve financial health of the Bank has already been taken up with the concerned authority so that the directions of Regulatory Authority i.e. RBI are duly complied.

She asked for strict adherence to guidelines issued by Reserve Bank of India from time to time to make this bank a vibrant unit not only for Jammu but whole of the country. She impressed upon the participants to work with full zeal and deliver to the best of their abilities to Bank’s clients and depositors so that CCBL which is serving the people of Jammu for the last more than four decades achieves its objectives and faith of its share holders.