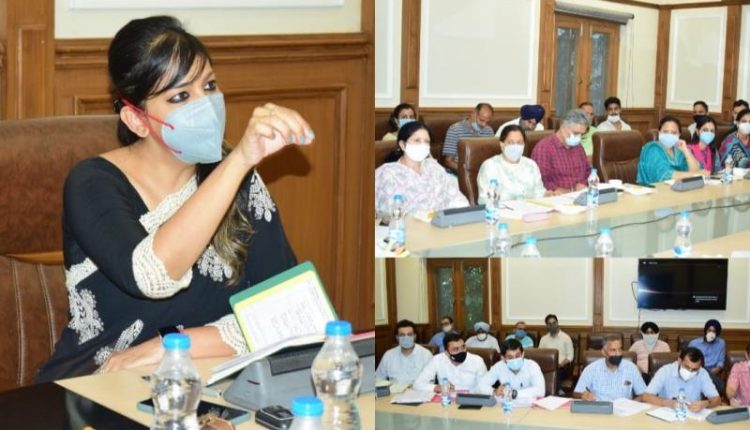 Directs officers to work with honesty, dedication to take department to new horizons

The meeting was aimed at reviewing the progress made in the issues like liquidation of JAKFED, Yuva Sahakar Scheme, modernization of Super Bazars, and other allied issues related to working of the department so as to induce more enthusiasm among the officers of the Department.

At the outset, the Secretary directed the officers to work with honesty and dedication so that the Department is taken to new heights and regains the glory like past times.

The Secretary expressed that the cooperative institutions, particularly, Super Bazars, have a vital role to play and these institutions can prove to be a game changer with focussed attention.

She expressed that the liquidation of JAKFED is to be finalized after addressing all the issues including completion and authentication of records so that the process is taken to its logical conclusion.

The meeting was informed that the matter has been taken up by liquidator with the concerned departments who have defaulted in making payments to JAKFED and accordingly figures shall be worked out by the liquidator for recovery of the amount.

The Secretary directed the concerned officers to submit the details of employees against whom cases are pending with ACB or Crime Branch so that the action on their claims is taken accordingly. She also directed the committee for submitting the records pertaining to retirees upto 20th of this month.

While reviewing the progress on proposals of new registrations, the Secretary emphasized that the registration of new cooperatives and cooperative societies should be completed within two months and weekly reports be submitted about the progress made therein.

Yasha further desired to ensure disposal of pending registration cases on fast track basis so that the backlog is cleared. Similarly, it was impressed upon the participating officers to pay focussed attention on pending audit paras so that all the paras are dropped within this month .

Progress on modernization of Super Bazars was discussed in detail and it was directed that the General Managers should make efforts to complete the work within the specified time frame. The Secretary directed that the Super Bazars need to launch an advertisement campaign for attracting more footfall of customers apart from participating in making supplies through GeM portal so that the volume of their business and profitability gets a boost.

Regarding bar coding, instructions were given that all the Super Bazaars should ensure that bar coded pattern of billing is in place as the same is transparent and time saving.

While reviewing the Yuva Sahakar Scheme, the chair directed that the salient features of the scheme may be shared with the field officers of the department who can give better suggestions based on the experience in the field.