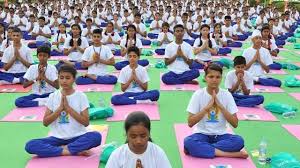 Due to stringent restrictions on mass gatherings arising from the contagious nature of COVID-19, the theme for International Day of Yoga (IDY) 2020 was adopted as ‘Yoga at Home, Yoga with Family’.

The Ministry also organized the ‘My Life, My Yoga (MLMY)’ i.e. the Jeevan Yoga video blogging contest with attractive prizes for the winners and runners-up. Additionally, the Ministry of AYUSH, in association with PrasarBharati, telecasted a trainer led Yoga session on DD National on the sixth International Day of Yoga.

Also, as a part of observation of IDY this Ministry has reached out to Gram Pradhans with suggested plan of action for Yoga promotion in villages. Common Service Centers (CSCs) of the Ministry of Electronics & IT have also been roped in for promotion of Yoga in rural areas.

To facilitate training from home, daily telecast of the Common Yoga Protocol (CYP) was organized on DD Bharti for making more and more people familiar with CYP and preparing them for the main event.

Prominent celebrities from the entertainment industry gave promotional messages on Yoga, encouraging the people to be active participants from their homes in the IDY.

This information was given by the Minister of Health and Family Welfare Dr. Harsh Vardhan in a written reply in the Rajya Sabha today.

University of York: York researchers collaborate in the ‘most important health…

iednewsdesk Jan 21, 2022
Researchers from the University of York and Hull York Medical School will work in partnership with the Bradford…