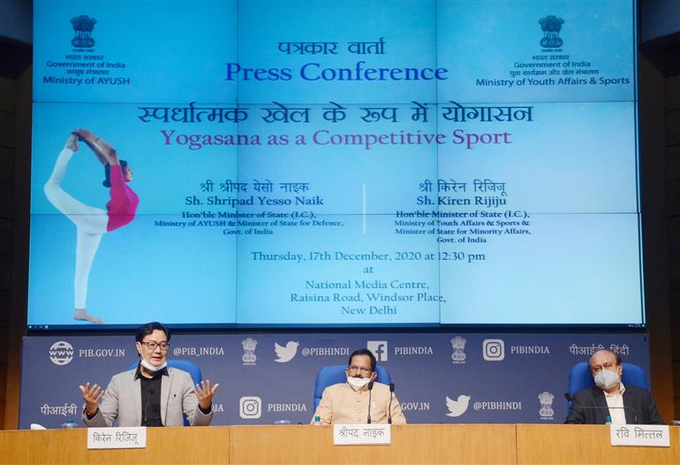 Yogasana will be introduced as a competitive sport in Khelo India , National and University Games: Kiren Rijiju

While addressing, Shri Naik traced the origins of Yogasana competitions to the Indian Yoga tradition, where such competitions have been held for centuries. He said that they are still being conducted today at multiple levels, but a strong and sustainable structure to impart national visibility to the competitions is yet to emerge. He further said that the Government decision to recognise Yogasana as a competitive sport comes after 3-4 years of wide consultations with the stakeholders of the Yoga sector.The Minister also said that Yogasana is an integral and important component of Yoga, which is psycho-physical in nature and popular across the globe for its efficacy in fitness and general wellness.

He further said “Yogasana becoming a sport will also ensure new technologies and new strategies being inducted into the disciplines, to benefit our athletes and officials towards building fruitful and fulfilling careers in this field”.

On this occasion, while addressing the media persons Shri Kiren Rijjju, said that the competitions that will arise out of the recognition of Yogasana as a sport will enhance interest in Yoga among people around the globe. He also said that both Ministries have been closely working together to establish Yogasana as a competitive sport. He further said that we are planning to include Yogasana as a Sport discipline in Khelo India and in the University Games and we will also pitch it at the National Games but the aim and objective of any sport is to be included in Olympics and this is a beginning of a long journey. Shri Rijiju also said that Yogasana is going to become a very beautiful, attractive and popular sport.

Secretary also informed the following steps or activities will form part of the road map and the future development of Yogasana Sport:

A pilot Yogasana Competition named as “National Individual Yogasana Sports Championship (Virtual Mode) to be held in early 2021.
Launching of an Annual Calendar of competitions, events and programs of Yogasana sport.
Development of Automated Scoring System for the Yogasana Championship.
Courses for Coaches, Referees, Judges and Directors of competitions.
Coaching camps for players.
Launch of a League of Yogasana, to ensure a career and social status for performers, experts and practitioners, to create Sports Stars among Yogasana athletes.
To introduce Yogasana as a Sport discipline in National Games, Khelo India and international sports events.
Steps to create job opportunities for Yogasana athletes.

Students can get benefits with Events of IISF 2020 at home: Dr Ranjana Aggarwal