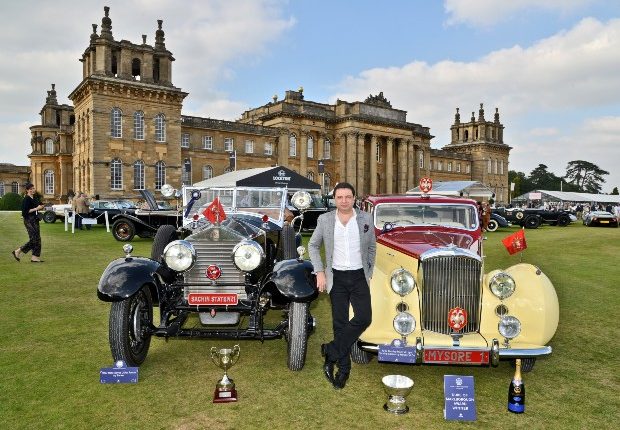 Mumbai: Three motor cars owned by leading industrialist and renowned collector Yohan Poonawalla
won major awards at the Salon Prive Concours d’Elegance at Blenheim Palace, UK, one of the
world’s leading automotive events. The cars were evaluated by esteemed jurors from the
International Chief Judge Advisory Group and included two cars owned by Maharajas and a
Rolls Royce that served as the transport of Queen Elizabeth II. The awards represent both
the rich automotive heritage of India as well as the strength of the Yohan Poonawalla Collection
which features diverse and historically significant cars that have won critical acclaim in
international circuits.
Winning the top honours, the prestigious ‘Duke of Marlborough Award’ was Yohan Poonwalla’s
1949 Bentley Mark VI 4-light Saloon by Hooper (pictured on the following page) – fondly
referred to as the ‘rhubarb & custard car’ for its bright red & yellow coloring and cream leather
& piped green upholstery. Originally ordered by HH the Maharaja of Mysore, Sir Jayachamaraja
Wadiyar, reportedly the second richest man in the world after the Nizam of Hyderabad, the car
was personalised with special features including plaques and shields in solid silver and 24k
Page 1 of 3
gold, and an illuminated plaque on the centre of the front of roof engraved with the royal coat
arms of Mysore.
Yohan Poonawalla’s 1927 Rolls-Royce Twenty HP by Barker (pictured above) was awarded the
‘Most Exceptional Coachwork Award’. The car started life as a Rolls-Royce demonstrator and
trials car, was subsequently owned by the Nawab of Sachin, HH Haidar Muhammad Yakut Khan.
Sachin. The car is an elegant four-door tourer in black, and was used for state ceremonial and
touring purposes. Its unique features include ivory colour painted controls, Stephen Grebel
hunting lights, dual windshield with twin aprons, the Sachin State flag mounted on the radiator,
the Nawab’s monogram hand-painted on doors, and an unusual set of 3 spare wheels.
Also winning an award was a majestic 1979 Rolls-Royce Phantom VI Limousine by Mulliner
Park Ward which was used by Queen Elizabeth II on several occasions. Motoring historian &
Concours consultant Mohammed Luqman Ali Khan stated, “PGH 116 was the transport of Her
Majesty during her state visit to Sweden in 1983. It was also the flagship demonstrator and
press car for Rolls-Royce Motors and was acclaimed as ‘The Ultimate Phantom’. Reacting on
the success of the cars, he added: “It is an absolute privilege to see these fabled maharaja cars
back on UK soil. Their recognition today on a world stage is a testament to the ever-increasing
popularity of the storied and historic automobiles of the erstwhile Maharajas. Commendable is
the zest with which India’s motoring legacy is being preserved by such dedicated collectors”.
The three cars come from the Yohan Poonawalla collection which is based in Pune and is the
labour of love of the family – Yohan, his artist, businesswoman, and philanthropist wife Michelle,
and children Tania and Zayan, who have both taken to motoring. Commenting on his
award-winning cars Yohan Poonawalla said: “I am delighted to see the cars do well in a global
contest. They represent the rich automotive heritage of India and this is indeed a proud
moment for all involved. This would not have been possible without my family’s complete
support, and my entire team’s dedication and hard work. I am happy to showcase these cars
here in Britain amongst the finest cars in the world.”
Salon Prive Concours d’Elegance took place at Blenheim Palace from 1-5 September 2021.
Now in its 16
th year the event welcomes leading international car owners, enthusiasts and
experts to celebrate the rarest and very best automobiles in the world. Chief Judges from the
ICJAG include Nigel Matthews, Ed Gilbertson, James Wood and Keith Bluemel amongst others.
You can find more information on the Yohan Poonwalla collection on Instagram
www.instagram.com/yohanpoonawalla and #yohanpoonawalla