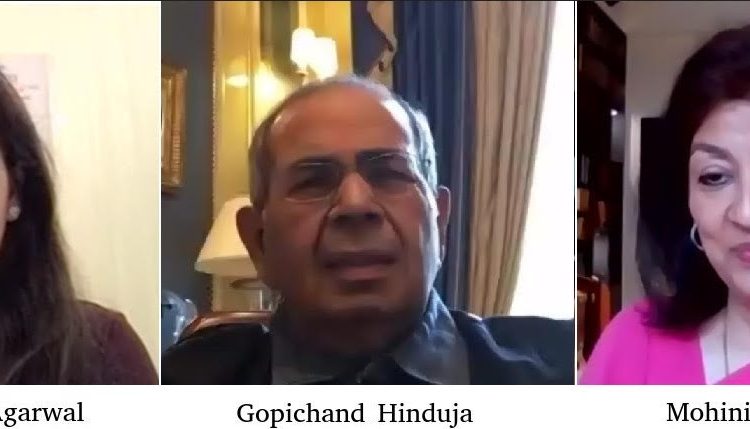 Kolkata: In a lively virtual session of Tete-a-tea, octogenarian billionaire-industrialist and businessman of Indian origin in UK, Shri Gopichand Hinduja aka G P Hinduja, said, “I don’t think money plays an important role in life. What is important in life is to give happiness to others. When you give happiness to others you feel permanently happy. I believe in humility. You don’t have to be rich to do good.”

The Tete-a-tea session was organised by Prabha Khaitan Foundation of Kolkata in association with Young FICCI Ladies Organisation (YFLO), Kolkata, and presented by Shree Cement. Shefali Rawat Agarwal, Chairperson of YFLO, Kolkata, introduced the session as conversationalist, UK-based author, journalist and social worker, Lady Mohini Kent Noon, engaged Shri Gopichand Hinduja in a conversation that revealed the octogenarian’s life experiences and strong belief in karma, samskaras, vedic wisdom, deep faith in Lord Hanuman and the influence of navagrahas and parents in life. G P Hinduja, who belongs to one of the richest and famous families in London, is the co-chairman of the Hinduja Group that has offices in over 48 countries.

“Today, whatever I am, it is because of my parents. In life, mother is most important because when a child is born, the Sanskars parents give to the child brings an impact based on the navagrahas or the nine planets which work on them. So life is complicated and difficult but if your karma and deeds help you to live comfortably. So what I learned from my mother from childhood was how to be generous and spiritual; how to feed everyone. Our parents taught us one thing that – everything belongs to everyone, nothing belongs to anyone,” Hinduja said.

Sharing some of the principles his father followed in life which influenced him, Hinduja said, “Work to give was the first principle. The second principle believed in was – the world is a bond – he never believed in lawyers, he never believed in documentations he used to only see if he has found the right person and how to keep up the word. His third principle in life was – growth with partnership. If you are able to identify a person and you can understand that you are dealing with the right person then it helps you to see how this principle can be kept.”

Responding to a question by Lady Mohini Kent Noon – So you look at the quality of the person not the project? So what are you looking for?

Hinduja said, “When I say quality of the person I try to see if the person’s intentions and his philosophy and nature is straight forward. Look! Profit and loss can always happen, this is like life and death. My father always used to believe that he should deal with right-natured people, the right quality of people and even if he had good projects where he knew he was making good money, and if he found that the character of the person was not good he never used to deal with them. So that is why he said growth with partnership.”