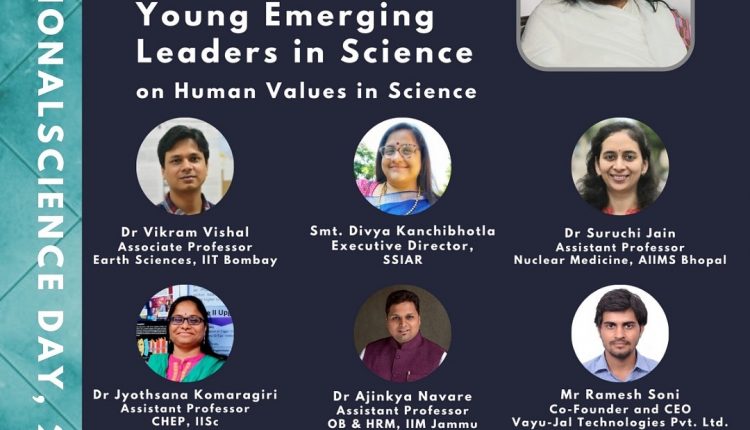 Bengaluru: On occasion of the National Science Day, young emerging scientists from fields as diverse as nuclear medicine, physics, earth sciences, innovation and management came together for a conversation brimming with insights and exchange of ideas, with global humanitarian and spiritual leader, Gurudev Sri Sri Ravi Shankar, hosted by The Art of Living’s Sri Sri Institute of Advanced Research.

In his address, Gurudev spoke about the natural temperament for science in every child, and how drawing from this fact, the texts like Upanishads (ancient Vedic texts containing rich wisdom and knowledge of material and spiritual sciences) started with questions or enquiries, and encouraged people to ask questions. He mentioned that in the ancient times, science and spirituality were never in conflict in the east, unlike in the occident. Gurudev cited an example from the Upanishads of a child going to his father and asking about the Brahman. Step by step, the father nudges the son to find the answer through analysis of assumptions and then coming to conclusions, this being the pedagogy of ancient systems of knowledge, something that is common with modern sciences.

In response to a question by Dr. Jyothsana Komaragiri, who is working with CERN Collider, about how the visible universe as we know it is just 5% and the rest is dark matter or dark energy and what ancient scriptures say about it, Gurudev pointed out that, on very similar lines, the world of names and forms (_nama_ and _roopa_) everything visible or measureable was called ‘_Maya_’, or that which doesn’t have existence of its own. So when matter is looked into with some depth, it is found to be full of space (_Shunya_). That field of energy that appears to be _shunya_ is not empty, but full of _chaitanya_, Gurudev explained. He also mentioned that ‘knowingness’ has also been considered as a _tattva_, which brings change or transformation in the visible universe, in line with many modern experiments that talk about how the act of observation changes the object observed. Gurudev also spoke about the _Nasadiya Suktas_ (hymn of creation, verses from Rig Veda) that talk about the cosmic origins. “The civilization that gave the world the concept of zero cannot be frivolous or unrefined,” Gurudev said.
About a question by Dr. Vikram Vishal from IIT Bombay, on the need to stop rampant exploitation of natural resources for sustainable development and sustainable future, Gurudev pointed out that the current generation was already more aware about issues facing them, and are much less consumerist than the previous ones. Gurudev also said that we needed to plant more trees and that nature recuperates on its own and that it is very resilient, like it was seen during the lockdown. He also encouraged planting more trees.
To another issue raised by Dr. Suruchi from AIIMS Bhopal, Gurudev encouraged people from both allopathic and Indian system of healing like Ayurveda and Siddha to work together, keeping their prejudices aside.

“At SSIAR we would like to use the opportunity of national science day to encourage more and more people to take up research in the ancient knowledge system and to bring about the scientific validation of these systems,” said Divya Kanchibotla, executive director, SSIAR.

Ural Federal University: Material Prospective for the Green Development of…

iednewsdesk Jan 23, 2022
Researchers at the Institute of Solid State Chemistry of the Ural Branch of the Russian Academy of Sciences and…

University of Birmingham: Melting glaciers may produce thousands of…