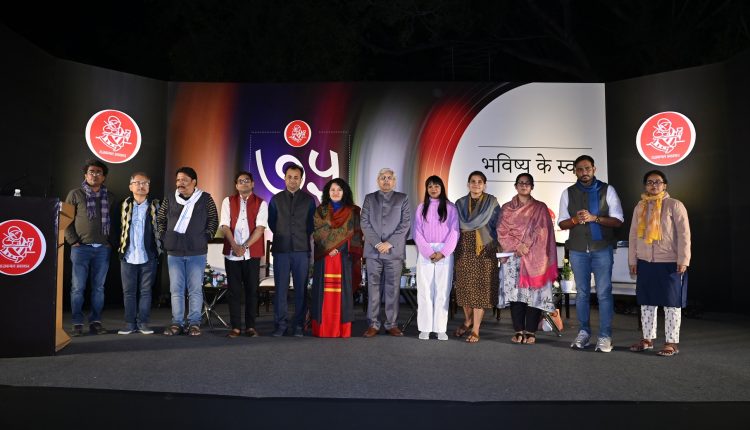 New Delhi : A buzzing session of voicing experiences was held as part of 75th foundation of Rajkamal prakashan Samuh, to carve a way for the future of creativity at IIC Delhi. The session commenced with an opening welcome speech by MD of Rajkamal Prakashan samuh Ashok Maheshwari and was moderated by Vineet Kumar, writer and media analyst.

Every year on Rajkamal’s foundation day we honor ‘Future’s Voice’, it is our festival of thoughts. Whereby we celebrate the process of reflection, we encourage analysis, deliberation and meditation as a churning process for creativity. Where young writers and authors are given a platform to voice their opinion and express their experiences. In the era of post-truth when it’s getting more difficult than ever to identify truth from lies and thus desensitizing people to its implications, it’s imperative that honest information and knowledge should be spread with due diligence through books using advanced integrated technology. Rajkamal Prakashan Samuh will strive to put forward its maximum books to be available in several vernacular languages. Also, we’ll expedite our processes to make available the best of hindi work as part of our contribution to satiate curiosity and needs of the youth; in the quest of attaining knowledge. We further aim to make best use of ever evolving modern technology to maximize our reach to potential readers, said Ashok Maheshwari, MD, Rajkamal Prakashan in his opening speech.

The event started with Amitesh kumar, folk theater, scholar and theater critic speaking about how Society is subconsciously parting its way from theater due to massive spur in digital video formats and Insta reels. Digital content is just a click away whereas you need to step out of your home to watch theater art. Theater allows you to communicate and struggle with real people around you. Theater excites and prompts you to think. A healthy democracy demands people who can ‘think’. He expressed his concerns about the influence of government and leadership on theater and other artforms. Meditating over this concern he said we are living in visual overload with too many videos bombarded over us. When pandemic struck firstly recorded videos were premiered on social media followed by live sessions which lead to transformation looking for opportunities in digital format of theater. Our Space and time has been filled with action which carries anxiety, conflict and pleasure similar to what you experience in theater.  Now in the times of massive surge in digital visuals (insta reels etc) when people experience this thrill they want to become part of it and it has become easier with instant access to mobile phones with equal possibilities of falling prey to shady ideas of thoughts along with.”

The event was followed by Charu singh, a researcher and critic. She expressed her thoughts to conclude ‘History is written by victors glorifying their own cause and disparaging the conquered foe.’ Charu Quoted Ramchandra shukla in her speech, “Pratyek desh ka itihas waha ki janta ki chitta vritti ka sanchit pratibimb hota hai” ( A country’s literature is a mirror of its mind chatter).

She further added that now that the times have changed the question is this: in the times of fascism and madness can criticism and history survive? “ Now the question isn’t whether we can sing our songs in these tyrannical times ? Rather the question is will those songs remain ours? Or we will sing the songs which the powerful and mighty leadership would want us to sing ?

In the same order Joram Yalam Nabam a folk literature scholar and author who hails from Nyishi Adivasi Tribe of Arunachal Pradesh expressed her concerns about religion and religion of majority government.  While talking about Adivasi Philosophy she spoke about who are adivasi in reality. That it is time to accept adivasi’s name as they describe you not as you want to label them.

Malvika Raj, Artist and fashion designer while voicing her experience said she endeavors to capture present times using Madhubani art as medium in her pictures. She lamented that though she had wanted to learn the tantra style of madhubani art form but she was denied the knowledge because of her hailings from the shudra (lower caste) community. She was deeply hurt when she was told that only brahmins can practice the tantra style of this artform. Later she noticed that Buddha is missing as a character in this art form when characters from Ramayan and Mahabharat can easily be found. This instigated her to begin a series of about 30 paintings “The journey” . This work was initially denied recognition as a madhubani art form in her state. Though her work was honored and recognised in foriegn cities and other countries. Furthermore today one of her paintings of Dr. Bhimrav Ambedkar  is now present  in Edinberg university UK.

Talking about A world beyond Stereotypes Anuradha Beniwal, traveler and author said, “ We view and perceive situations, other individuals and events through our own tweaked glasses. Eye-glasses which are colored and tweaked by our mental conditioning which has developed over the years as a part of our upbringing, judgment of experiences etc. Opinions or judgments  aren’t good or bad in themselves, the problem begins when we impose our opinions or judgments on others and try to frame others in our idea of preset notion. We try to tame and put the burden of boundation on other people to make them live their life in a certain way. Problem begins when we don’t accept others as they are.   Or when we try to fit ourselves in a set frame to validate our sense of existence in a society.”  She further added that we must practice to be our authentic selves and not be influenced by how our society wants us to be.

Nilotpal Mrinal Author, Lyricist and Singer spoke about hindi writing in future and writers role. And when it is about the future it does mean economic struggles faced by Hindi writers. It is perceived they are either underpaid or majorly rejected either for being different from their conventional counterparts or for out of league and

Abhishek Srivastav, author and translator voiced his opinion about the Role of translator, importance of correct translation in the time of cultural clashes. The diversity of languages amid plenty of idioms and conventional phrases stops him from reaching on one common truth. How a translator struggles amid two languages emanating from two different cultures and striking a balance to reach one common truth . He raised the question: should a translator be more loyal to the language he is translating or the language in which it has to be translated.

Ecosystem Based Adaptation is the way forward for India: WOTR