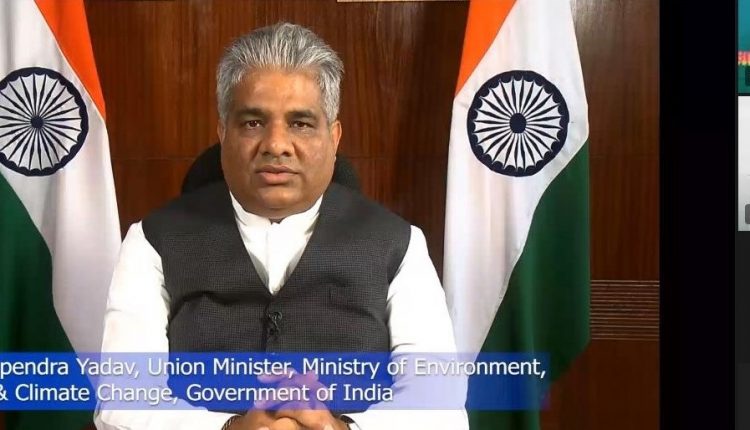 New Delhi : A ‘Youth Pledge’ on climate action was prepared jointly by youth from across the country on Friday, 1st October 2021 as part of the 2nd Edition of the Youth Climate Conclave (YCC). The YCC was organized by the European Union to India, Deutsche Gesellschaft für Internationale Zusammenarbeit GmbH (GIZ), The Energy & Resources Institute (TERI), and Council on Energy, Environment and Water (CEEW) as part of the Strategic Partnership for Implementation of Paris Agreement (SPIPA) project being implemented with the Ministry of Environment, Forest and Climate Change (MoEFCC) as the nodal ministry. At the end of the youth climate conclave a new photo, blog and short video competition was launched, with possible access to the next Youth Climate Conclave.

YCC 2nd Edition was organized preceding the upcoming International Adaptation Futures Conference 2020. The selected youth participants were divided into two groups for the debates on 3 topics, based on the capacity building and training programs organized on day 1 and day 2. The debate session was followed by a presentation and discussion on a draft youth pledge on possible changes in lifestyle that the youth can bring. The Youth Pledge was presented on day 3 followed by launch of three competitions (blog, photography and short video) as part of YCC 3rd edition. The Youth Pledge marks the culmination of the 2nd Edition of the “Youth Climate Conclave 2021”, a three-day programme during which several youth participated in awareness building sessions and deliberations to present their views about issues related to climate change.

The event was held in the presence of HE Mr Bhupendra Yadav, Union Minister, Ministry of Environment, Forest & Climate Change, Government of India (via video message), HE Mr Vincenzo de Luca, Ambassador of Italy to India, HE Mr Alexander Ellis, British High Commissioner to India, HE Mr Ugo Astuto, Ambassador of the European Union to India and Dr Vibha Dhawan, Director General, TERI.

Speaking on the occasion, Hon’ble Minister, Mr Bhupendra Yadav, said, “Across the globe the young are considered the agents of social transformation. Therefore, the youth of today can play a very crucial role in deciding the course of our planet.”

HE Mr Ugo Astuto, EU Ambassador to India said “We need higher levels of ambition and a renewed sense of urgency in fighting climate change and biodiversity loss. The youth has a special role to play as it will be most affected by climate change. It is important for the youth to speak up & drive the world towards a green, digital and resilient future,”

NSW Government Deploys Pega to Help Speed and Simplify Its…

JAIN Online to co-host the 4th edition of Techspectations…

“Making young people responsible & recognizing them as a key player in climate action governance & policy making is crucial. They are our future leaders & global change makers as we work together to tackle #climatechange” HE Mr Vincenzo de Luca, Ambassador, Embassy of Italy in India said in his special remarks.
HE Mr Alexander Ellis, British High Commissioner, UK in India said in his special remarks, “We need the voice, votes & ideas of the youth as they are the ones who will take us that much further in our attempt to mitigate the impacts of climate change,”

In her opening remarks at the event, Dr Vibha Dhawan, DG, TERI said, “It is the youth who are going to be the trendsetters & will bring about a change through sustained #ClimateAction.”

The youth pledge will be presented at the Adaptation Futures Conference along with a ceremony for felicitation of the winners of debate, photo, short video and blog competitions. The ‘Youth Pledge’ text will highlight the need for younger generations to assume an active role in finding constructive solutions to climate change.

The three-day programme included presentations by high level experts on topics including “Do we listen to Science?”; The “We are the World” as to (how) does the global community address the balance between adaptation and mitigation; The “India acts” on the actions taken in India in terms of climate change mitigation and adaptation.

The Youth Climate Conclave 2nd edition was launched on the eve of the International Youth Day 2020 i.e. 11th August 2020, and included a series of activities such as photography, blogging and short video competitions for youth in age categories of 10 -18 yrs (A – Category) and 19-25 yrs (B – Category) whose winners were awarded alongside the presentation of the Youth Pledge at the Conclave.