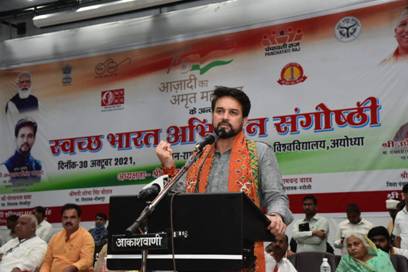 Youth have the Power to Free the Country from Plastic Waste through Jan Bhagidari: Anurag Thakur

New Delhi: The Union Minister of Information and Broadcasting, Youth Affairs and Sports, Shri Anurag Thakur today called upon the youth of the country to become a part of Cleanliness Campaign and become instrumental in taking it forward. Shri Anurag Thakur was addressing the culmination of a one month long Swachch Bharat Abhiyaan under AzadiKaAmritMahotsav at Avadh University, Ayodhya today. The Minister said that we could not be part of India’s freedom struggle but we can definitely be part of the campaign to free the country freedom form plastic garbage.

Calling upon the youth of the country to contribute to the cleanliness campaign, he said that in this one-month campaign, a target was set to collect 75 lakh kg of plastic waste from different places in the country, but the goal was achieved much ahead of the target date. So far 108 lakh kg of plastic waste has been collected from three lakh 41 thousand villages across regions. Nearly 6 lakh cleanliness programs were organised under this campaign throughout janbhagidari, the Minister said.

Ministry of Rural Development launches an initiative to enable rural SHG women to earn at least Rs.1 lakh per annum

University of Groningen: Orange the World lights up the Academy Building in orange

iednewsdesk Nov 26, 2021
Around the world, one in three women face violence, and in the Netherlands, this percentage even rises to 45%.…