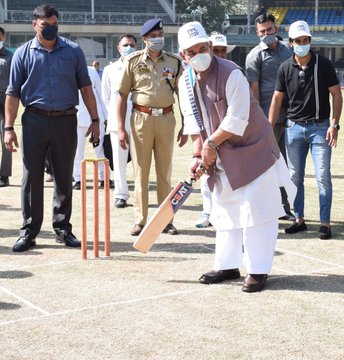 Srinagar: Lieutenant Governor Manoj Sinha said that the youth of J&K have immense potential and can play a significant role in bringing positive change. He said this while inaugurating the Police Premier League Cricket Tournament at Cricket Stadium, Sonawar, here today.
Addressing the gathering in the stadium, Lt Governor expressed delight to see the sports culture in Srinagar. He noted that this is the land of lake and saints where sports can also play a significant role in the peace, prosperity, and development of the region.
Congratulating the Jammu and Kashmir Police for organizing the Cricket Tournament, the Lt Governor observed that such events by J&K Police show the human face of the Police force. He added that there is no dearth of talent in J&K, and only the right direction & little bit of hand-holding is required to channelize the energy of youth. “Sports play an important role to catalyze positive change. With sports, we can defeat negativity” he said. He exhorted the youth of J&K to adopt sports which would not only promote the sports culture in the valley but also in turn help them to shine in their life.
The Director-General of Police in his welcome address highlighted the role of Jammu and Kashmir Police in promoting sports culture in J&K and also spelled out the future activities in sports including cycling race and water sports.
The Lt Governor reiterated that the UT government is committed to provide world-class facilities to identify, nurture and train sportspersons by establishing international standard infrastructure in J&K. He further said that different concerned departments would come together to put concerted efforts towards the overall enhancement of the sports ecosystem in the UT.
While elucidating on the role of sports in current times, the Lt Governor said that sports are no longer seen as a leisure activity but as a great career option, a shift from the earlier mindset.
Lt Governor also distributed several Cricket Kits and gave his best wishes to all the players of 16 teams from across Srinagar, which will play for 10 days in the Police Premier League Cricket Tournament.
The Lt Governor was accompanied by Director General of Police Dilbag Singh; ADGsP RR Swain, AK Choudhary, SJM Gillani, and AG Mir; IGP CRPF Kashmir Charu Sinha; IGP Kashmir Vijay Kumar; IGP Headquarters Garib Dass; DIG Central Kashmir Range M Suleman Choudhary; Deputy Commissioner Srinagar Dr. Shahid Iqbal Choudhary and other senior officers of Police and civil administration.