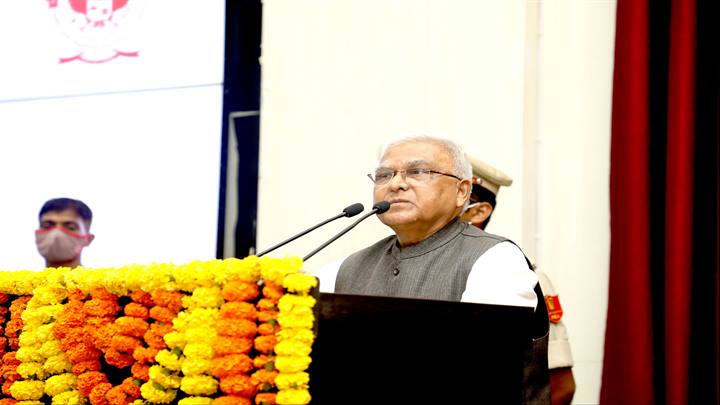 Youths should draw inspiration from the personality of Prime Minister Modi: Governor Patel

Bhopal: Governor Shri Mangubhai Patel told the youths to take inspiration from the personality of Prime Minister Shri Narendra Modi. Learn from his strong will power, high human sensibilities and devotion to duty and implement them in life. Shri Patel inspired the youth by referring to the personality and methodology of Shri Modi as the Chief Minister of Gujarat. He said that smart and strong methodology is the guarantee of success. Make such a goal which is to be pursued. To achieve the final goal, one should move forward by achieving small goals.

Governor Shri Patel was addressing the programme on the occasion of birth day of Prime Minister Shri Narendra Modi at Rajiv Gandhi Technological University, Bhopal today. He started the blood donation camp in the university and planted Rudraksh sapling.

Referring to the incident of floods in Surat, Gujarat, Governor Shri Mangubhai Patel said that once there was a severe flood in Surat city. The low-lying localities of the area were flooded up to 14 feet. As soon as the information was received in the night, he reached the site as in-charge minister. The then Chief Minister Shri Narendra Modi was informed about the flood. Shri Modi told that he would reach Surat in the morning itself. Shri Patel told that after coming to Surat, Shri Modi, sitting in a small boat, went door-to-door in the flood-affected area and spoke directly to the people. The flood affected families were overjoyed to find the Chief Minister among them, saying that you have come, now there is no problem. Shri Modi discussed with them with cordiality and inquired about even their small needs. Most of the families said that they could not drink tea for the last two days due to non-availability of tea items. On returning from the tour, Chief Minister Shri Modi directed all the collectors of the districts on the banks of the river late in the night to make small boats available in Surat before 7 am. In this way, 100 boats were collected and all the materials needed for tea were delivered to every flood affected house between 7 am and 10 am.

Governor Shri Patel said that having self-satisfaction is the biggest happiness in life. So it is not appropriate to run after anyone for money, power and prestige in life. He said that there is a favourable environment for startups in the country. There is immense potential for growth in the food and agriculture sector. The central government has also created a one lakh crore agri-infra-fund for basic facilities related to agriculture. A seed fund of one thousand crore rupees has been started to provide initial capital. He said that a big market has also been provided to the startups. In government tenders, startups are also getting the same opportunity as any big company. So far, about 8 thousand startups are registered on the GeM portal, which have also done business of about Rs 2,300 crore. An MoU was also signed between the Rajiv Gandhi Technological University and the National Cadet Corps in the presence of the Governor.

In the welcome address, Vice Chancellor Shri Sunil Kumar said that under the new education policy, NCC has been added as an elective subject along with technical education by the university. Credit will also be given to engineering students. The programme was inaugurated by lighting the lamp by the guests. Brig. Sanjoy Ghosh, Commanding Officer of NCC and Prof. Chetan Singh Solanki, founder of Energy Swaraj Foundation, professors, officers, staff and students of the university were present.