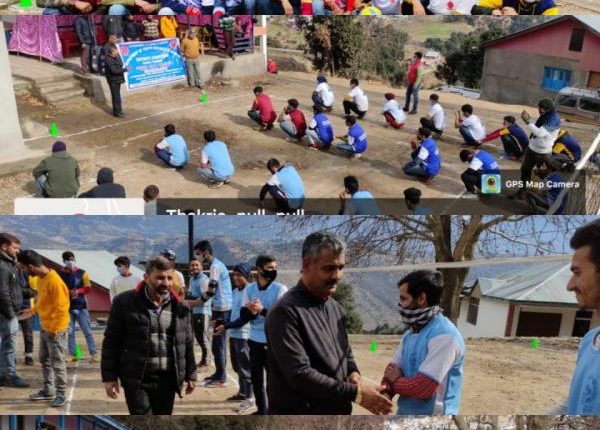 KISHTWAR : Youth Services and Sports Department Kishtwar today organized a volleyball tournament at block Thakrai under the aegis of YSS-Cup 2021.

Sports department, under the leadership of Director YSS J&K UT Gazanfar Ali, has been holding series of sports events to provide youth sports platform to channelize their energy in the right direction.

In Kishtwar, the events are being held across all blocks in coordination with District Administration and under the supervision of Deputy Commissioner, Ashok Kumar Sharma, by DYSSO Kharati Lal Sharma, said Suman Kant, Incharge block Thakhari in his inaugural speech.

At the venue HSS Filler, which has been set for inter Panchayat block level tournament, Suman Kant addressed to participants and said underlined the need to instil proper knowledge among youth and teach them discipline, brotherhood, discernment and intense desire to do something good for the society and nation.

Chief Guest, Rajesh Roshan Sarpanch, Dharbadhan & Guest of honour Sanjeet Shan, interacted with the players and advised them to play the game in a well disciplined manner.

The Chief Guest declared the tournament open & officials called both the captains to the net at the start of the game to clarify rules and conduct a coin flip.

The toss winning team (pyt Dharbadhan) chose to serve and the game started with full support of spectators.