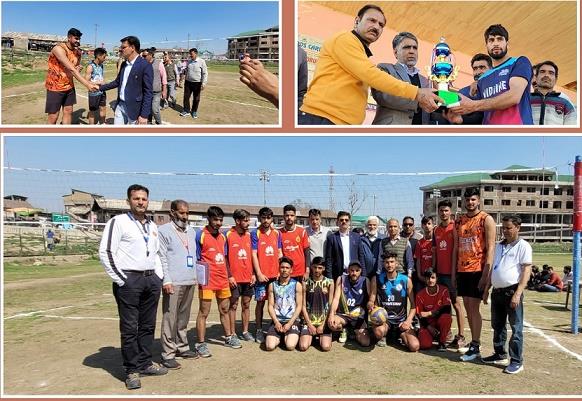 ANANTNAG:  The Department of Youth Services & Sports organised YSS Cup-2021 in four sports disciplines in which Cricket, Kabaddi, and Volleyball & Kho-Kho were its part during the whole journey.

In these series of tournaments which started from Block Level wherein teams from each Panchayat were drawn to participate in Block level competitions.

At District level 8 teams from each Block (16 CD Blocks-32 Teams in each Sports discipline) participated in each sports event with a total number of 1390 Participants (Youth in open age category). The matches for this tournament were completed at various venues and field officials of the department of Youth Services & Sports played a vital role in successful completion of this tournament by performing various assignments of the tournament as technical officials including Coaches, Management.

At the closing ceremony of this tournament District Education Planning Officer, Muhammad Yousuf Jan was the chief guest on the occasion.

In his address the chief guest congratulated the participants for taking part in sports activities at various levels and counted them the benefits of these sports events.

Speaking on this closing ceremony the District Youth Services & Sports Officer, Mushtaq Ahmad Pampori congratulated all team participants for playing under sportsmanship during whole journey and assured them in future the department will try to organise such types of tournaments in more sports events.

The District Youth Services & Sports Officer also congratulated the Activity Section of the District Office for successful completion of event in which services of Muhammad Abass Dar and Bilal Ahmad Dar were efficiently used.

Speaking on the closing ceremony captains of finalist teams thanked the Department of Youth Services & Sports for organising such tournaments as they also believe that such tournaments are the shinning ray of hope for keeping Drug Free Society.

The winners team of District Level will represent District Anantnag in UT Level competition starting from 28th March this year. Pertinent to mention the event was organized by the department of Youth Services & Sports Under the Banner of YSS-Cup.