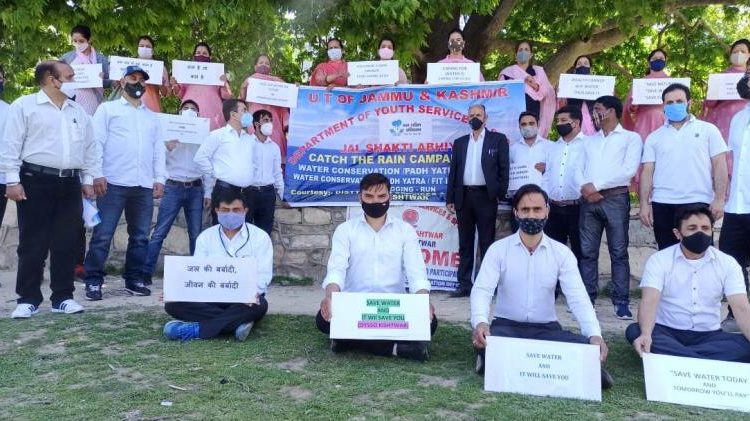 Kishtwar: A rally was today flagged off by the District Youth services and sports Officer Kishtwar, Kharati Lal Sharma under the banner of Jal Shakti Abhiyan (Catch The Rain-where it falls when it falls).
The event was organised by the Sports Department as a part of Jal Shakti Abhiyan wherein Physical Education, Lecturers, Masters, Teachers, Rehbar-e-Khel teachers and other employees of Zone Kishtwar and Nagseni took out the rally. They were holding placards displaying messages of Jal Shakti Abhiyan to aware local people about the importance of conservation of water.
The rally was started from Char Chinar Kishtwar and covered the nearby areas.
The Chief Guest, DYSSO Kishtwar, said that an awareness campaign has been launched in all zones of District Kishtwar to save water and prevent misuse of water. He also urged people to use water judiciously and directed all to take initiatives in homes, villages, Towns to raise awareness among people on the importance of water and its conservation because when we save water, we will save Earth.
Adding more he requested participants to do more and more plantations to save forests.
Chander Shekhar (PEL) was the overall Incharge of the event, while I/c ZPEO Nagseni Suresh Parihar, I/c activities Javed Iqbal Sheikh along with I/c press and Publicity, Javed Kripak and other senior Sports employees alongside teachers and other staff members were present on the occasion.
Similar rallies were also carried out in Zone Drabshalla, Padder, areas under the supervision of I/c ZPEOs.

Principal Secretary to Lt Governor chairs meeting of all DCs; Directs for early installation of Oxygen Generation Plants across the UT