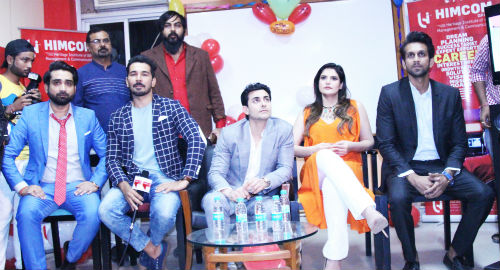 Delhi: Star cast of the upcoming Bollywood film Aksar 2, Zareen Khan, and the Managing Director of the Institute Syed Masood graced the campus of Heritage Institute of Management and Communication in Delhi on Tuesday.

Abhinav Shukla , Mohit Madaan and Gautam Rode talked to the students and celebrated the cake cutting ceremony of Children’s day. The students and the faculty warmly welcomed the film stars. The students were overjoyed by the presence of big film stars among them. They put several questions to them related to film Aksar2, as well as their past roles.

Speaking about their experience at the HIMCOM in Delhi, actress Zareen Khan said, “It was a great experience coming to HIMCOM and promoting our film. The students here are really good and I wish them best luck in future.”

Gautam Rode, who will be seen in the lead role in this film, said, “It is overwhelming to see such welcome and appreciation.”

The film stars also wished the students a very happy Children’s Day.
The film is slated to release on November 17, 2017.