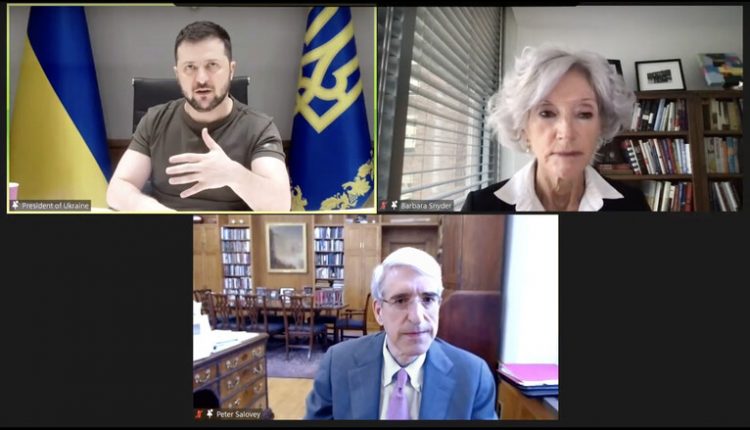 The ongoing Russian invasion of Ukraine has triggered a humanitarian catastrophe and threatens the very ability of the country to exist. Part of the devastation is the assault on Ukrainian higher education and the scientific fields, including the displacement of students, scholars, and researchers.

On Monday, Ukrainian President Volodymyr Zelenskyy met with presidents, chancellors, and provosts from America’s leading research universities — including Yale President Peter Salovey — to discuss his vision for rebuilding Ukraine’s higher education system, and how educators can help in the days and months ahead.

The event, which was held over Zoom, was organized by the Association of American Universities (AAU).

During the conversation, Zelenskyy spoke about the resiliency of Ukrainian students and educators and their efforts to continue their educational mission even as they fight for their right to life and freedom in the midst of war.

“Life must go on, regardless of the fact that in some occupied communities death is raining,” Zelenskyy, dressed in what has become a trademark green army T-shirt and sitting in front of a Ukrainian flag, told the audience. “Life in our country must go on, and shall go on. And the students shall study.”

He also spoke about how AAU institutions can build on the work they have already done to support displaced Ukrainian students and researchers by establishing long-term partnerships to provide technical expertise and assistance to the country as it rebuilds its decimated education sector.

The need for support, he said, goes beyond financial commitments. Reconstruction of Ukraine’s educational system, he said, will require expertise from the global community.

During the conversation, university leaders applauded Zelenskyy for his leadership in the face of the invasion, and for standing as a bulwark for democracy.

“I know I speak for everybody when I say we so admire and appreciate your leadership and the bravery and suffering of the Ukrainian people,” Salovey told the Ukrainian president.

Salovey also commented about the important work done by Ukrainian students on American campuses, including at Yale. “They have organized rallies in support of the Ukrainian effort,” he said. “They have been educating their fellow students even while they themslves have been incredibly stressed and concerned about their families back in Ukraine.”

He noted that Yale and other universities have supported these students in many ways, including restructuring their financial aid and offering flexibility with academic requirements.

Salovey also asked Zelenskyy about how to support students from other states in the region, including those from the Baltic states and, indeed, Russia, who are also enduring personal difficulties as a result of the invasion.

Zelenskyy responded that it is important that there be no discrimination against any students. However, he urged that all students, regardless of their home country, not be silent in the face of injustice.

Speaking to the audience, Zelenskyy discussed the range of responses from international states after the Russian invasion. While some have decried the attacks and committed resources to supporting Ukraine, he said, others have turned a blind eye.

For many people, he said, it is during their years in schools when they decide who they want to be and what they want to stand for. He urged students to not be observers in the face of injustice, whether it is in their own lives or on the global stage.

“You should instead be fighters for democracy, guardians of democracy,” he said. “Because that’s how you defend your own way of life, your people.”

Study finds impact of sleep-disordered breathing in adults over 70

University of Maryland: Sports Stadiums Could Change the Game for Future Elections

iednewsdesk Jul 6, 2022
The state of California, through an agreement between Gov. Gavin Newsom and the Legislature, has allocated $1.8…

University of Maryland: Sports Stadiums Could Change the Game for…

University of Virginia: Cold War Relic Could Be Ending Time On Grounds

Cornell University: Bring back the wolves – but not as heroes or…