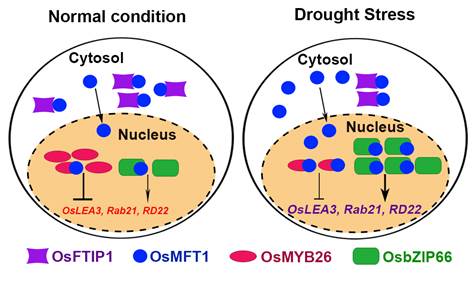 The research team led by Dr. SONG Shiyong from the Institute of Crop Science, College of Agriculture and Biotechnology in Zhejiang University recently published an article entitled “Nuclear translocation of OsMFT1 that is impeded by OsFTIP1 promotes drought tolerance in rice” in the journal Molecular Plant on May 3. This study reveals that in response to drought, downregulation of OsFTIP1 permits OsMFT1 to be translocated into the nucleus. It is of tremendous significance to explore the molecular mechanism of drought tolerance and genetic improvement.

Abiological factors have posed an increasingly serious threat to rice production with the change of global weather. Drought has become the leading environmental threat that hinders the productivity of rice. It is thus of supreme importance to engage in research into the molecular mechanism underlying drought response in rice. In previous work, researchers conducted drought treatment of FT-INTERACTING PROTEINS (FTIPs) and found that the survival rate of Osftip1 was significantly higher than wild species, implying that it negatively affects drought response. Further study revealed that OsFTIP1 interacts with rice MOTHER OF FT AND TFL1 (OsMFT1), a phosphatidylethanolamine-binding protein (PEBP), which promotes drought tolerance in rice. OsMFT1 was found to interact with two key drought-related transcription factors, OsbZIP66 and OsMYB26, and to regulate their binding capacity on drought-related genes, thus enhancing drought tolerance in rice. Researchers also discovered that OsFTIP1 impeded the nucleocytoplasmic translocation of OsMFT1. These results demonstrated that the dynamic modulation of drought responsive genes by OsMFT1-OsMYB26 and OsMFT1-OsbZIP66 complexes is integral to OsFTIP1 effect on impeding nuclear translocation of OsMFT1. OsMFT1 interacts with OsbZIP66 and OsMYB26 in the nucleus to regulate their transcriptional ability for mediating the expression of drought-related genes, thereby determining drought tolerance.

This study offers a clear picture of the molecular mechanism of the OsFTIP1-OsMFT1-OsMYB26/OsbZIP66 module and reveals that rice has the capacity to regulate genetic expression through translocations of key protein into the nucleus. This opens up a new avenue to enhancing drought tolerance in rice.

Pune based start-up all set to bring non-toxic, gentler, long lasting hand sanitiser to the market