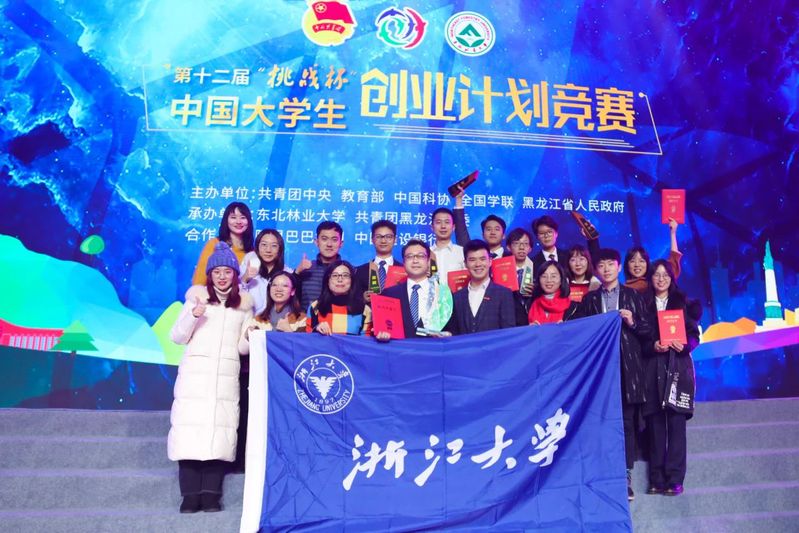 The competition made its debut in 1999, and as of 2000, it has been held every two years. It is currently one of the most popular national innovation and entrepreneurship competitions in China. This year’s competition attracted about 179,000 projects from 2,786 schools nationwide.

Recommended by School of Aeronautics and Astronautics.

Giant Print Technology has developed a new micro-LED mass transfer method which can improve efficiency by 20,000 times and reduce costs by over 50% as compared to traditional transfer methods. It owns independent intellectual property rights and in the future, it will produce micro-LED panels and sell them to electronics manufacturers so that more people can gain access to high-quality micro-LED displays, thus promoting China’s cutting-edge display technology to the world.

Recommended by College of Media and International Culture and College of Computer Science and Technology.

The data crowdsourcing platform developed by Spicy Data can dispatch netizens with idle labor across the Internet in an intelligent manner to complete such tasks as data annotation and data review with high efficiency and high quality with the support of platform algorithms. It provides data customization, finished datasets and SaaS services for artificial intelligence companies or research institutes, etc., thus solving a series of tough problems with traditional data customization plans, including slow speeds, low qualities and high prices.

Recommended by College of Life Sciences.

The Smart Rice-fish Culture is committed to promoting a green, organic and eco-friendly model that integrates rice production and aquaculture. It boosts the quality of rice paddies for yields, thus lifting local farmers out of poverty and realizing rural revitalization. The project effectively promotes the development of economy in the remote and border areas, and propels the upgrading of the agricultural structure and the transformation of old and new dynamics.

Recommended by College of Electrical Engineering.

On the strength of a massive database provided by the attack and defense drill system, the Azure Defense team has developed the “Dolphin Security Guard”, an attack protection software system with good soundless command detection and defense capabilities. The team has provided security protection schemes for many smartphones, power grid control devices and inspection robots, and has gradually promoted relevant standards to industrial and civilian fields, thus filling the void in terms of regulations related to the voice security industry in China.

Recommended by College of Optical Science and Engineering.

Yisai Technology is committed to research into smart in-vehicle head-up displays which present data without requiring drivers to lowering their heads so as to ensure safe and comfortable driving. By drawing on an innovative free-form technology, the team has contrived a complete scheme for the optical system, thereby becoming China’s trend-setter in research and development of in-vehicle displays.

Recommended by Department of Chemistry.

The “Fight Against Aldehyde” team has pioneered in developing HZP—a platinum-based nano catalyst with the hydrophobic zeolite molecular sieve as a carrier, which can capture and decompose formaldehyde once it is discovered. The HZP-removal porcelain has 4 core advantages: high efficiency, great convenience, enduring effects and remarkable safety. The aldehyde removal efficiency reaches 96.3% at room temperature and no consumption or secondary pollution will occur during the process.

GoPrint is an innovative smart hardware created independently by undergraduate students. It is portable and practical. Though it is miniature in size, it can print materials several times larger than its own area. The team has explored a brand new application scenario to promote mobile offices in the digital era. GoPrint shows great promise as a unique gadget in the future market.

Recommended by College of Media and International Culture and College of Computer Science and Technology.