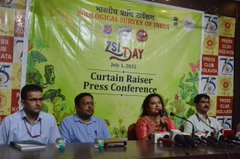 Dreaming big, the ZSI Director today stated that ZSI proposes to venture into trans-boundary faunal diversity exploration in the neighbouring countries like Bangladesh, Myanmar in collaboration with Armed Force and Paramilitary agencies of the Indian Government. It also proposes to venture into the deep sea mission of the Ministry of Earth Sciences and Taxonomic Application as part of Access and Benefit Sharing by breakthrough research in association with CSIR, ICAR, Department of Science and Technology, Department of Biotechnology and identifying potential pollinators and agricultural pests. She also propounded that ZSI proposes exchange programmes for BRICS countries as well as partnership between SAARC nations and also through Bay of Bengal Programme (BOBP) Inter-Governmental Organisation.

Dr Banerjee also elaborated on the programmes of the 107th ZSI Day and stated that the volume on Animal Discoveries and Plant Discoveries-2021 will be released on that date with the Union Minister to distribute prestigious E K Janaki Animal Awards to three distinguished Taxonomists of the country. This apart, the Minister will also release ZSI publications like Faunal Diversity of Bio-geographic zones of India, Deccan Peninsula, Faunal Diversity of Coringa Wildlife Sanctuary, Andhra Pradesh, Faunal Diversity of Satkosia-Baisipalli Wildlife Sanctuaries, Satkosia Tiger Reserve, Odisha and Birds of India and Botanical Survey of India (BSI) publications like The Wild Orchids of Goa, Flora of India-Vol 9 and Algal Flora of Jharkhand, based on the field researches conducted by both ZSI and BSI over the past five years. Besides, a website depicting 1500 species of butterflies will be launched on that day, she stated.

Dr Banerjee spoke about the organisation signing MoUs internationally with Natural History Museum, London, Natural History Museum of Paris and International Barcode of Life Consortium in order to give impetus to the pursuit of academic excellence. At national level also ZSI has signed MoUs with 25 Central and State universities across the country, she stated. On the 107th Foundation Day MoUs will be signed between ZSI and University of Burdwan and West Bengal State University, she said. She also disclosed that in near future ZSI is interested to sign similar MoUs with Kalyani University and University of North Bengal.

Dr. Banerjee also deliberated upon ZSI’s formulations to kill mosquito vectors in aquatic stages. She said, such an invention developed several botanical essential oil formulations for eco-friendly control of mosquitoes which may be used with conventional insecticide applicators and by hand held applications. According to Dr Banerjee, Automated Surveillance System for mosquitoes and other insects are the recent innovations by ZSI.

Bandaru Dattatreya, Governor of Haryana address the participants of the Public Policy Programme