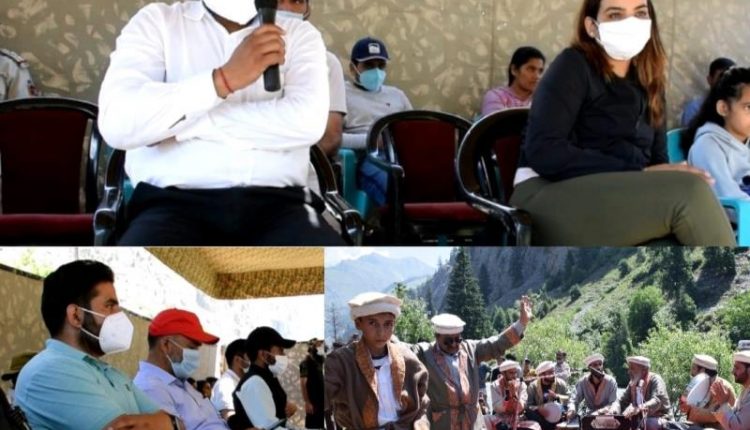 BANDIPORA : The Two-day Gurez Festival organised by the Department of Tourism and District administration Bandipora concluded successfully on Friday witnessing an overwhelming response from the people from across the country.

Several local artists under the umbrella of Habba Khatoon Dramatic Club presented cultural programmes depicting the rich cultural heritage and traditions of the erstwhile Dardistan and the Dard Tribe residing in Gurez Valley.

Speaking on the occasion, Div Com said that the aim of organizing such festivals is to promote the Gurez valley as a tourism destination. He said the tourist in contemporary times doesn’t want only sightseeing but want range of activities along with sightseeing including adventure, sports etc. He said Gurez Valley, in particular, has everything to offer for tourists of all types be it site seeing, adventure tourism, Sports tourism etc.

He said the Lieutenant Governor’s administration is keen to bring the Valley on the international tourist map and called for improving tourism infrastructure in Gurez Valley while taking care of its flora and fauna. He said measures are being taken to improve connectivity to the picturesque valley particularly during winter months to boost the tourist arrival.

He appreciated the role of youth in Gurez in exploiting the tourism potential by offering range of facilities to the tourists and earning their livelihood. He said the youth have set up hotels besides providing tents to the tourists and earning a handsome amount. He said the government will provide hand holding to such youth so that they are able to develop an eco-friendly eco tourism and earn their livelihood in a dignified way.

The stalls attracted a large number of people who not only purchased several products but were also informed about the rich heritage and culture of the Gurez valley.

While highlighting the measures being taken by the government to promote tourism, PK Pole said Gurez has tremendous tourism potential and the department is in process to upgrade infrastructure facilities to attract more tourists to the picturesque valley. He said the UT government has been making every effort to promote the beautiful Gurez valley on the international tourism map and has published extensive publicity material to showcase its culture, heritage, art and craft in addition to its scintillating beauty.

Later, the Div Com gave away awards to best performing artists including to a young student who received huge applause by performing with elder artists and singing in Shina language.