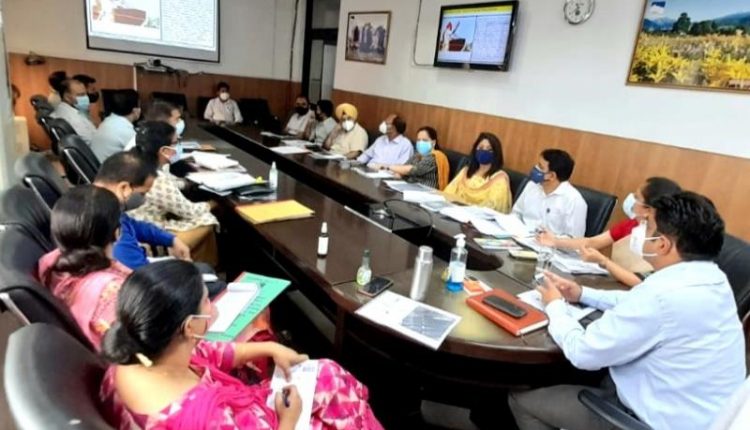 JAMMU : Divisional Commissioner Jammu, Dr Raghav Langer today chaired a meeting of Deputy Commissioners, JK Trade Promotion Organisation and Heads of other concerned departments to review the district export plans under District Export Hub imitative.
Pertinently, the District Export Hub initiative will form an important component of the new trade policy envisaging tapping of the potential of each district of the country to help them to emerge as export hubs.
The scheme intends to boost export potential of the districts by identifying products and export clusters in each district through the District Level Export Committees. This new approach not only de-centralizes the planning process but puts the local producers and manufacturers at its centre.
During the meeting, Managing Director JK Trade Promotion Organization gave a detailed presentation on the overall objectives of the scheme.
It was informed that ‘District Export Hub’ is an initiative of the Union Ministry of Commerce and Industry launched in coordination with DGFT and State and UT Governments for formulation of the Robust District Action Plan.
While highlighting the features of the district as Export hub, the MD JKTPO apprised the Div Com that the mission of this plan is to synergize the efforts of the center and the state/UT governments to create institutional mechanisms for promotion of trade. She said that Jammu and Kashmir is favorable for Agricultural, Horticultural and Handicrafts & Handloom products, which come with higher nutritional values and uniqueness of the artistic products. She said with the right strategy, a diversified mix of products of the UT can be promoted across the globe and a strong brand can be built for export products of Jammu and Kashmir.
It was further informed that the process flow requires institutional mechanisms, which include identification & recommendation of the products by the DLEPCs, Finalization of products by apex level committee, district expert action plan to be prepared by DGFT, approval of export action plans by concerned DCs at district level etc.
The DCs apprised the Divisional Commissioner that district level export promotion committee meetings have been held in the districts and they have identified various products (district specific) for promotion.
Threadbare discussions were held on conceptualization and implementation of the strategy for developing districts as export hubs.
The meeting also informed about the activities held at district level to boost district as export hubs, which include collaborating with DGFT to ensure finalization of export Action plans and identification of products under One District One Products, number of events seminars, webinars workshops, buyer seller meets, GI tagging of products.
The meeting was informed that efforts of the Centre and State Governments are being synergized to create institutional mechanisms to promote trade with a special focus on the MSME Sector which often lacks the knowledge or risk appetite to venture in the international market.
The Department is also organizing various training and registration drives for traders and exporters to create awareness among them, besides proactively engaging in capacity building measures to improve quality assessment, supply chain management and logistics under a well-defined export strategy.
The Div Com instructed all the concerned departments to undertake extensive branding of J&K’s products by developing a unique logo/hallmark for easy identification and quality assurance in the international market; products originated and exported from the Jammu division.
The Div Com emphasized that each district should have its own District Level Export Action Plan, depicting bottlenecks for exports of potential products, training and development requirements along with requirements of establishing quality check and testing labs, warehousing/cold storage etc wherever necessary for promotion of exports.
As per the directions of the office of Hon’ble Lieutenant Governor, the Div Com asked the DCs to launch registration drives for boosting number of exporters registered in the district, identification of sellers with export potential for inclusion in domestic/ international delegations in districts, organizing trade cum exhibition fares in the district in coordination with JKTPO, district stalls displaying the export potential and culture in the upcoming Jammu Haat.
The meeting was attended by MD JKTPO, Ankita Kar; Directors of Agriculture, Horticulture, Handloom & Handicrafts, besides senior functionaries of JK Khadi Village Industries Board, banks and other concerned while Deputy Commissioners of Jammu division along with other concerned officers attended the meeting through video conferencing.