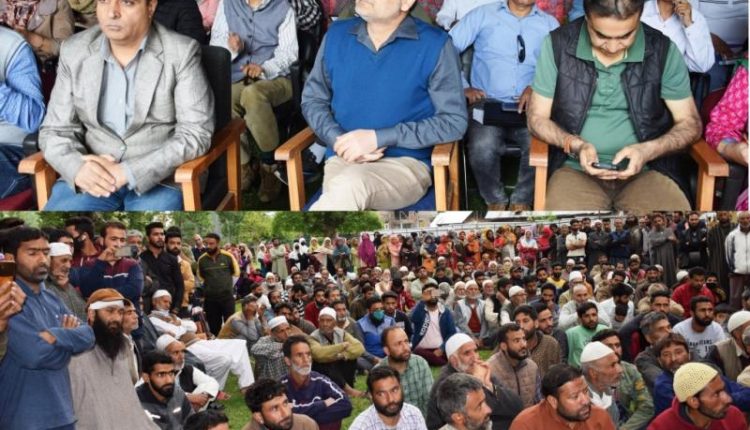 During the Darbar, Sarpanches, Panches and representatives of local Auqaf committee and other respected form panchayat halqas of Dreygam, Falsal, Parnewa, Handjan, Bugroo, Lanura and other villages raised their demands and issues with the DC.

Adding, he said that the district administration is eyeing to cover a target of 20,000 youth this year, so that they become self-reliant and establish employment resources for not only themselves but also for others in the district.

The DC issued on spot directions for the development of facilities including motorable bridge over Shaliganga Nallah, playfield, Panchayat Ghar and issued instructions to the concerned offices to examine the demand for establishment of PHC, upgradation of School and other facilities at Dreygam on priority.

The DC called on the holistic development of the area and emphasized that work on all ongoing projects be expedited to ensure timely completion.

During the Public Darbar, Ex. Engineer PHE informed that work on various WSS under Jal Jeevan Mission shall be taken up for execution on war footing to ensure round the clock water supply to all households in the Parnewa Block.

The DC said under JJM projects worth Rs. 1200 crore shall be executed to provide tap water supply across the district.

He urged locals to register for Golden cards to avail free of cost health cover insurance for up to Rs. 5 lac at any empanelled hospital.

Instructions were given to the Agriculture department to initiate double crop farming for progressive farming and doubling farmers income in the area.

The DC further instructed Panchayat members to ensure cleanliness and maintenance of proper sanitation in all panchayat blocks of Parnewa and urged PRIs to ensure that people ensure ban on use of one time plastic items and dumping of garbage roadside and in open areas. He said that instead the public should use separate dustbins for proper disposal of garbage generated daily by the households.

The DC also directed concern to ensure land identification for establishments of segregation sheds and dumping sites in each panchayat block.

Meanwhile, the DC also visited the shrine of Sheikh Noor- u- din Noorani RA at Dreygam and paid obeisance there. A local delegation called upon the DC and raised issues.

The DC directed ACD Budgam to take up two shrines for stairs works under MGNREGA on war footing and assured locals that all their genuine demands shall be taken up for redressal.