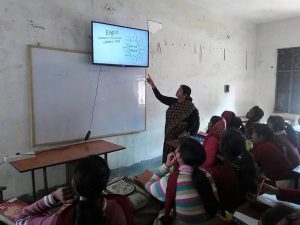 Mumbai: Open Learning Initiative, or OLI (https://www.youtube.com/c/OLINSSIITB), as the channel is called, has crossed the 10,000 landmark point within a year. An initiative of the students of National Service Scheme (NSS) in the Indian Institute of Technology Bombay, this YouTube channel hosting Science and Maths videos in regional languages caters to students studying in vernacular medium schools. Launched in May 2015, the aim of OLI is to make quality education available to students across India, irrespective of a language barrier.

Crossing the 10,000 subscribers mark within 1 year is laudable because it reflects a 4000% growth. The channel currently features more than 170 educational videos in 8 regional languages (Hindi, Marathi, Gujarati, Telugu, Tamil, Malayalam, Bengali and Oriya). Yash Sanghvi, founder of OLI said, “My happiness is soaring past the rooftop. No one had expected this kind of growth”.

The seed of the fruit was laid when Sanghvi was coordinating with NGO Vidya two years ago. The NGO expressed a need for regional language educational videos for their Audio Visual module. Since students failed to find suitable videos on the internet, NSS decided to start its own channel. “We wanted to help as many students as possible,” he added.

A fourth year UG student in the Mechanical Engineering department, Sanghvi currently serves as the Overall Coordinator of NSS IIT Bombay and has been leading the OLI team. Many schools in rural areas are now using this channel daily to teach students.

Sunil B, one of the coordinators of OLI recollects, “One day, the Web Learning coordinator of the Giridih district, a naxal-affected district in Jharkhand, commented on our channel. She told us how the videos are helping them educate students in the absence of permanent teachers in remote areas of Jharkhand. We were simply overwhelmed. The number of students benefiting from OLI in each class ranges from 40 to 100.”

Sanghvi attributes OLI’s growth to three factors: Quality, Regularity and Viewer-Interaction. “We followed very strict quality protocols. Each video was reviewed for the clarity of voice, organization of content and overall aesthetics. We also checked whether a particular video is going beyond the textbook and giving extra insights into the topic or not. Most of the videos uploaded on the channel have been approved only after 2-3 iterations,” he said.
OLI uploads at least 2 videos every week and runs special programs like December Bonanza. Viewer-interaction in the form of comments, answering their queries, creating videos based on their demands, has also been an important factor in building the 10,000-strong community. Interacting with the audience builds trust and adds credibility to the channel, believes the OLI team. Elaborating on the December Bonanza, Guru Vamsi, another coordinator for OLI said, “December Bonanza is a challenge for the team. We upload one video everyday throughout December. Also, we try to launch a new language”.

Archit Sanadhya, one of the Heads of the Educational Outreach Department of NSS IITB, under which OLI falls, feels that OLI has benefitted a lot through word-of-mouth publicity. “We haven’t spent a single rupee on advertising. People discovered our channel when they were searching for educational content in regional languages. When they found the content to be good, they spread the word. That’s how the channel grew.”

There is also a section on scientific experiments and a section on English, because training students in English is a key objective. The OLI team envisions to cover all the regional languages of India and also cover other subjects apart from Science and Maths in the future. More people of India will surely benefit as OLI expands its outreach and increases the number of videos on the channel.