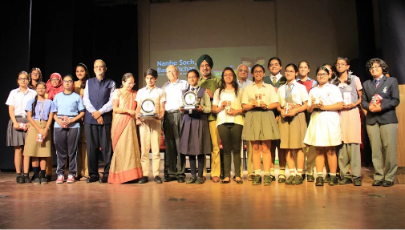 Chennai: At the 4th Nanhi Chhaan National School Essay Contest, which was held at the Sri Sankara Vidyashramam Matriculation Higher Secondary School, Thiruvanmiyur, Chennai saw 17 Schools from 8 different states participate on the topic “Child marriage – It must be stopped”.
Aryan Sadh, a student from Vasant Valley School, Delhi, walked away with the first prize of Rs 50,000 and a trophy while the second prize of Rs, 25,000 and trophy was bagged by Nasreen Sultana of Bal Mandir School, Bhopal, Madhya Pradesh. Over 400 students across the country participated in this national contest, the finals of which was held in Chennai
The judges Mr. Vijay Thadani, Co founder, NIIT, Mr. Prashanth Vasu, Location leader & Partner, McKinsey, Chennai, & Dr. Lakshmi Vijayakumar, Founder, Sneha Chennai, hosted the question and answer session as well as group discussion for the students who took part in the contest and selected the winners thereafter. Mr. N. Ravi, Director, Kasturi & Sons Ltd was the Chief Guest and distributed the prizes. Mr. N. Kumar, Vice- Chairman, The Sanmar Group was also present.
This is the fourth edition, of the Nanhi Chhaan Foundation national level essay contest with a topic which is a major concern in many parts of India. Through the National School Essay Contest, Nanhi Chhaan hopes to raise awareness and to educate young citizens of the country about such crucial and sensitive issues. This year the topic was “Child marriage – It must be stopped”.
According to Mr. Harpal Singh, Chairman, Nanhi Chhaan Foundation, said, “The problem of child marriage in India remains rooted in a complex matrix of religious traditions, social practices, economic factors and deeply rooted prejudices. Both girls and boys are affected by child marriage, but girls are affected in much larger numbers and with greater intensity. Through the schools essay contest Nanhi Chhaan hopes to develop an ethos where India’s children engage with the country’s social agenda and help eliminate the institution of child marriage.”

Big win for Scullers, Jealous21 and Urbana at CMO Asia 2017