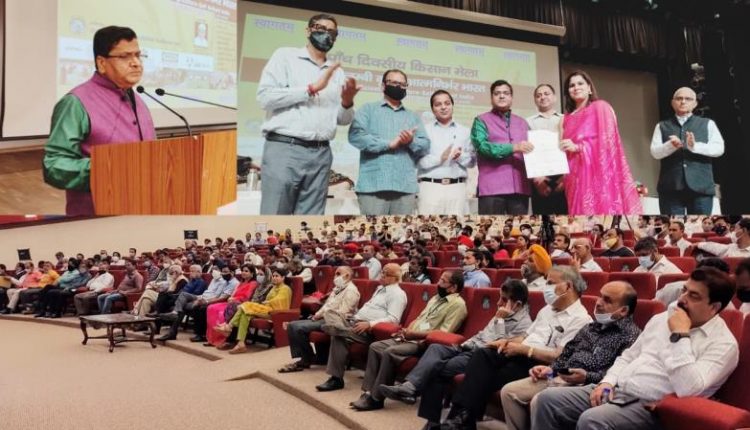 Jammu: The five day Kisan Mela which was organized physically as well as virtually for the first time by SKUAST-Jammu concludes today varsity’s Chatha campus.

Indonesia: After 18 months of school closures, children must…

Speaking on the occasion, Prof. J. P. Sharma, Vice Chancellor, SKUAST-Jammu while expressing his satisfaction and happiness on the successful completion of 5 days long Kisan Mela congratulated all the farmers, agri-preneurs, NGO’s, government departments, KVK’s, research stations, different Divisions of the University, private companies etc. for their active participation in Kisan Mela. He said that with the exposure of such type of melas, farmers have been immensely benefitted directly and hopefully in future will become successful entrepreneurs who will play a key role in national economy. Prof. Sharma informed that around seven thousand farmers attended the mela physically whereas around one lakh viewers watched the mela virtually. He said that stalls exhibited in the mela were of national standard and at par with reputed national institutes and further announced that in future Kisan Mela will be organized twice in a year. He congratulated organizers and committee members of different events for successfully arranging and conducting the mega event. Earlier, progressive farmers such as Kulbhushan Khajuria, Tejinder Singh, Sham Lal, Mathura Das and Tilak Raj gave feedback of mela and congratulated Hon’ble Vice Chancellor and team of SKUAST-Jammu for their continuous help and support to the farming community. Conveners of the different events also presented report of various activities conducted during the mela. About two hundred stalls of University, government departments, Agri Startups and private companies were exhibited. Besides, Kisan Goshti was a regular feature during mela wherein each day five lectures on agriculture and allied subjects were delivered by the experts. Question-answer session was also the part of the Kisan Goshti.

Director agriculture in his address recalls his long term association with the University and expressed his happiness about the growth of the University and contribution of the scientists towards the farming community. Director Horticulture in his address congratulated Prof. Sharma for bridging the gap between Department and farm University. Director Sheep Husbandry said that the growth of nation depends on the growth and prosperity of the farming community and advocated for adoption of integrated farming system at large by the farmers.

Livestock show was organized twice during Kisan Mela, first on the first day of mela which was inaugurated by Hon’ble LG of JK UT Manoj Sinha wherein a total of 100 animals of different species and breeds participated. On the last day of mela, second Livestock show was organized which was inaugurated by Hon’ble VC Prof. J P Sharma, SKUAST Jammu in august presence of Director Agriculture and Director Horticulture Jammu. On 2nd day of Livestock show 70 animals of different species and breeds along with about 200 livestock keepers participated in the programme. Dr. Hans Raj Bhardwaj, Prof. and Head, Division of Veterinary Surgery & Radiology and Dr. Vijay Kumar Sharma of KVK Kathua were Convener and Co-Convener of the livestock show.

Progressive farmers of Jammu Division were felicitated with awards for their contribution in agriculture and allied sectors. Prizes were also given to exhibitors in different categories. Under government department category, first prize was given to Division of Sericulture, second prize to Division of Animal Genetics and Breeding and Livestock Production and Management whereas third prize was bagged by KVK, Jammu. Earlier, Dr. S.K. Gupta, Director Extension and convener Kisan Mela welcomed all the dignitaries and participants. Dr. Jag Paul Sharma, Director research cum registrar and patron Kisan Mela, Dr. S.K. Gupta, Director Education, all the statutory officers, head of the Divisions, faculty members, non teaching employees, students and farmers were also present during the valedictory function. Vote of thanks was presented by Dr. Rakesh Sharma and proceedings were conducted by Dr. Pawan Sharma.

India Education Diary Bureau Admin Sep 20, 2021
Jakarta: Almost 18 months after schools in Indonesia were closed to curb the spread of COVID-19, UNICEF and the…

Dr. Mishra was the ideal and inspirational personality of the medical…