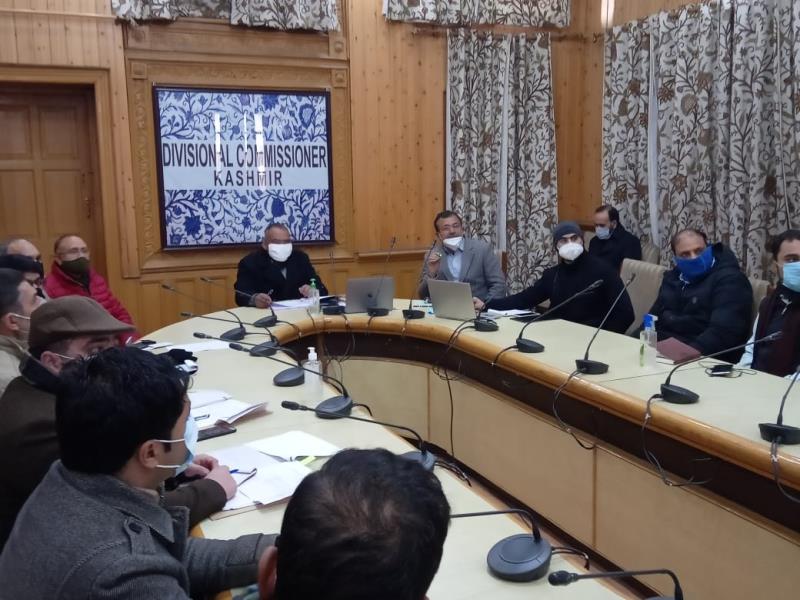 Srinaggar: The Divisional Commissioner Kashmir, Pandurang K Pole today chaired a meeting to review pace and progress made on Z- MORH and Zojila tunnels connecting Kashmir with the Ladakh region.

At the outset, Executive Director, NHIDCL, gave a detailed Power Point Presentation (PPP) of Z-Morh tunnel, construction of approach roads, lanes, protective walls, drains besides the road and other projects.

The chair was informed that despite the snowfall the work process was going on smoothly on Zojila tunnel.

At the outset, the Div Com said that the 65 percent physical work has been completed on Z- MORH while as its escape tunnel is likely to be completed by March- ending.

He said that despite snowfall and harsh weather conditions, the work was going on smoothly almost on all road and tunnel projects.

Stressing on the speedy work process, the Div Com instructed concerned to ensure prompt response by all concerned departments to all bottlenecks causing inconveniences in the construction process.

He emphasized on immediate lifting of scrap from the Z- MORH site and ensure adequate dumping site facility is provided to the concerned for dumping purpose.

He further stressed on providing uninterrupted power supply and carrying out snow clearance work on all approach roads and sites.

The Div Com directed concerned to ensure land acquisition process is completed with release of compensation to the land losers at the earliest.

At the outset, the Div Com also reviewed the status of various other projects including approach roads of Srinagar-Zojila and Kargil, Gulmarg- Baramulla Highway, Vailoo- Donipawa Ashajipora Alstop beisdes various other proposed road projects in Kashmir.

Div Com directed concerned to put all men and machinery into service and expedite the work process.

The meeting was informed that the deadline for the tunnel is December -21, 2023 however, a bonus upto Rs 400 crores shall be provided to the concerned agency if the project is completed before it’s set deadline.

Among others, the meeting was attended by Executive Director, NHIDCL, Anand Pahal, Commandant HAWS, CE Beacon and other concerned.

While DC Kargil and ADC Gabderbal other concerned also attended the meeting through videoconferencing.