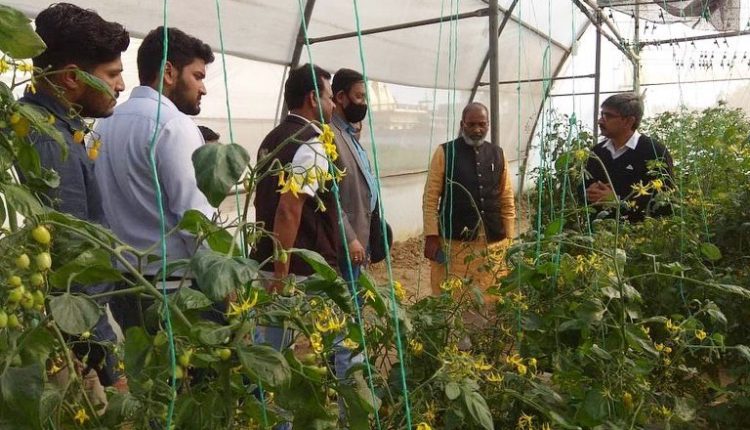 A delegation of BRICS CCI recently visited Centre of Excellence for Vegetables, Ghauraunda, Haryana to get familiar with Israel’s Agro-Technologies Solutions

New Delhi: BRICS Chamber of Commerce & Industry, in association with Economic Mission in New Delhi and Mashav organized a visit for its members to get familiar with Israel’s Agro-Technologies Solutions to Centre of Excellence for Vegetables, Ghauraunda, Haryana. The delegation was guided by top experts and technicians in the agriculture sector.

The members of delegates were interested to know about Israeli Agriculture Technologies and wanted to have a feel of it. At the CoE Six Israeli companies are having ongoing projects. A request had been made to their local representatives to give Presentations and explain about their Products/ Technologies. Five companies: Naandan Jain, Netafim, Hazera Seeds, ADAMA and ICL confirmed their participation. After presentations and Q&A Dr. Deepak Kumar, Incharge of Centre led the visitors to the Open Fields and explained about the Israeli technologies to grow vegetables. After this the group visited the Hi-Tech Nursery where they were shown the techniques to grow seedlings from seeds. The visitors were amazed to see the Vegetables varieties grown from seeds given by Hazera Seeds and produced with Israeli technologies. They were shown the Fertilizer unit as well as how to make natural fertilizer.

Centre of Excellence for Vegetables in Gharaunda of Haryana’s Karnal district is the first Indo-Israel agricultural project in the country. Protected cultivation enables high-quality vegetables like cherry tomatoes, cucumber, brinjal, chilly, color Capsicum, green capsicums and so on to be grown round the year. They are cultivated in high-tech polyhouses, naturally-ventilated polyhouses, walk-in tunnels with controlled climate and provisions for micro irrigation along with drip Irrigation for unseasonal crop cultivation and high yield.
Dr. BBL Madhukar, Director General, BRICS CCI said, ‘One of the most critical issues for the farming community is availability of water. Under the India-Israel Agriculture Project, Centre of Excellences was established in various states as a breakthrough move to help the farming fraternity in India to adopt the latest technologies such as micro irrigation systems. I encourage this approach and wish to organize more such visit with the support of Embassy of Israel.’

Mr. Sameep Shastri, Vice Chairman, BRICS CCI said, ‘BRICS CCI has always followed a ‘BRICS & Beyond’ approach. These delegations are an epitome of the strong relations that India and Israel share with each other. We hope to organize more such visits to motivate our youth to invest, understand and engage with agriculture as a focus sector for our country’s progress.’