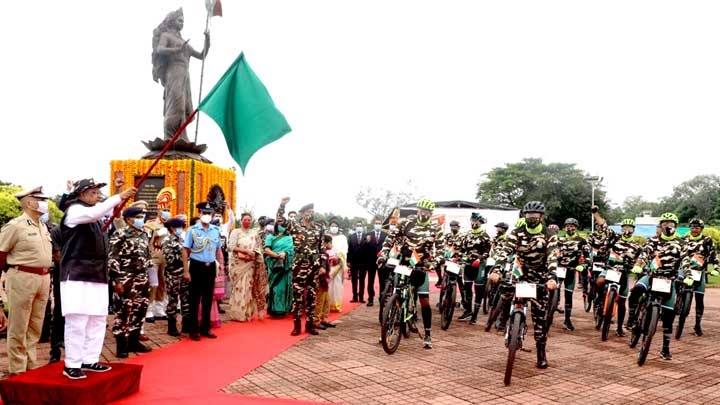 BHOPAL: Governor Shri Mangubhai Patel has said that Sainiks are the pride of the nation. People should take inspiration from them to serve and commit themselves to the nation. He said that Azadi ka Amrit Mahtosav should be celebrated as a Jan Utsav. He said that the border forces should popularize the tales of unknown heroes, heroines who laid down their lives for the freedom of the country among the different parts of the country, languages, class and communities,

Governor Shri Patel was addressing the launching programme of the cycle rally of Sashastra Seema Bal at Shaurya Smarak today. The cycle rally starting from Shaurya Memorial Bhopal will end at Rajghat, Delhi.

Youths should draw inspiration from the personality of Prime…

Governor Shri Mangubhai Patel said that our country was a symbol of knowledge and prosperity. Here we had centers of knowledge like Nalanda and Takshashila from where people from all over the world used to come to acquire knowledge. It was so rich that rivers of milk and curd would flow. There were such brave fighters here whose example was given in the world of valor. The British, who came to trade, took advantage of the mutual jealousy, division and discrimination among the people and grabbed power by dividing them. He said that we have attained freedom after much struggle. The young generation should be acquainted with the sacrifices made for this Azadi ka Amrit Mahotsav. He lauded the military forces engaged in the security and service of the nation for organizing the Independence Festival programmes.

Director of Sashastra Seema Bal Academy, Shri Rajinder Kumar Bhumla told in his welcome address that the cycle rally will be completed on October 2 at Rajghat after traveling about 865 kms. He gave information regarding the formation of Sashastra Seema Bal. He said that training is imparted to the officers from Assistant Commandant to Deputy Inspector General level by the Training Academy located at Bhopal.

Dr. Mishra was the ideal and inspirational personality of the medical world : Chief Minister Shri Chouhan

Youths should draw inspiration from the personality of Prime Minister Modi: Governor…