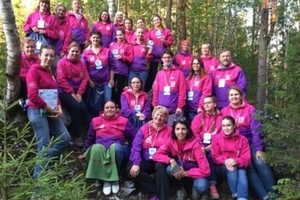 Help was required at information desks, in the technical, entrance areas, at the seating in the parterre area, as well as in the media support of the festival.
34 volunteers from different regions of Karelia, Moscow, St. Petersburg, Arkhangelsk and Pskov helped in holding the Ruskeala Symphony music festival, which ended in the Ruskeala mountain park last weekend.

For the second year in a row, the operator of the volunteer program is the Karelian Volunteer Development Center.

All volunteers passed a competitive selection, in which 140 people took part. The formed team was provided with travel from Petrozavodsk to the venue of the festival and back, accommodation in a camping, meals and uniforms. The volunteers received training and instruction on site.

Among the volunteers were students, teachers and employees of Petrozavodsk State University.

Ruskeala Symphony is one of the few major events held outside Petrozavodsk. You need to get to the place, live in tents, and when helping at the festival, you need to quickly navigate a large area and help others, because many guests come to the mountain park for the first time. I was the coordinator of the entire team of volunteers, my tasks included organizing the entire volunteer program from recruitment, selection, training, to the direct coordination of all volunteers at the event itself. This is a final briefing, placement in positions, operational coordination in case reinforcement and additional assistance are needed on some functions. I have good impressions, first of all, from the well-coordinated and high-quality help of the team of volunteers. It was a little thrilling at first

– said the coordinator of volunteers Yulia Malikina, student of the Institute of Pedagogy and Psychology of PetrSU.

To become a volunteer for the Ruskeala Sympfony festival, I was prompted by the desire to help in organizing such a significant event for the Republic of Karelia, as well as the goal of gaining a new invaluable experience of volunteering at a major event.

The festival was held in the Ruskeala mountain park, where guests from all the criminals of the country gathered. In two days, viewers managed to plunge into the world of cinema, classics, folk music and much more. The artists performing at the Ruskeala Sympfony have demonstrated all their musical talents, allowing them to completely immerse themselves in mesmerizing works right in nature, among insanely beautiful landscapes.

My role as a volunteer was to monitor compliance with all anti-epidemiological requirements at the entrance to the event. In addition, I had the opportunity to work in the stalls, where I accompanied the guests to their seats. For me, this is a new useful experience of helping in organizing a major event, as well as working in a team of the same volunteers who want to ensure the maximum comfort of staying at the festival.

This is my second time at the festival. Last year I took part as a full-time volunteer, this time I decided to try my hand at the position of a team leader.
From year to year, the Ruskeala Symphony prepares an amazing program with impressive concerts, in which the virtuosos of their craft are involved.

Along with the fulfillment of the assigned tasks, we still managed to enjoy the event itself, to feel the harmonious fusion of the world of music and the world of nature.

For me, the opportunity to become a volunteer is, first of all, a chance to help people, and, of course, a resource for personal growth and self-improvement,

The Ruskeala Symphony Music Festival has been held in the Ruskeala Mountain Park since 2017. In the open air, a series of concerts is held with the participation of stars of the music and opera scene, performing in the most prestigious halls in the world. This year, four thousand spectators have visited the festival site in two days.

Summer programs of the Linguistic Center of PetrSU