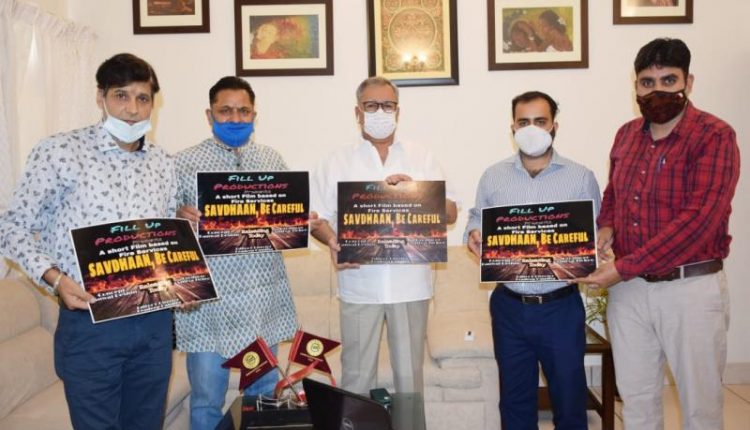 Speaking on the occasion, Advisor Khan said that this short film will be an eye opener for many careless people and shall give a clear message to them on fire safety.

The Advisor in his speech appreciated the role of Fill-UP productions team for such a great effort and wished them good luck for future projects.

Speaking on the occasion, Aditya Tickoo, Producer FiII-UP productions gave a brief about the film and said that we have been able to conceive a film “Savdhaan, be careful” with the support of Kanwal Peshin who is working as officer in Fire and emergency services department. He added that the script and concept was prepared by him and he has many praiseworthy scripts and concepts to his name like Mata Alakhishwari, Navrch, Harratri, Nandsarkaar, Shastri ji and Visthapit Kab Tak.

Er. Kiran Wattal noted social worker and Convener Vishaw Kashmiri Samaj in his speech said that this film has been released to make people, school children, staff and general masses aware about Fire hazards and role of Fire services, as it has been assessed that human carelessness is the main cause behind fire incidents.

He also appreciated Advisor Khan for constant support and encouragement of KP youth and community.

The film has been conceived, edited and directed by Pradeep Pandita who is a noted film maker and social activist in Jammu and has many credits to his name.

“SAVDHAAN, BE CAREFUL” is a story of a nomad family residing in a temporary shed in a forest which catches fire accidently by the cigarette bud thrown by the owner carelessly and his family pays the price besides role of fire services has also been highlighted.

On the occasion, a “Kenzi khoss” (traditional Kashmiri) bronze cup was presented to the Advisor as a good will gesture.