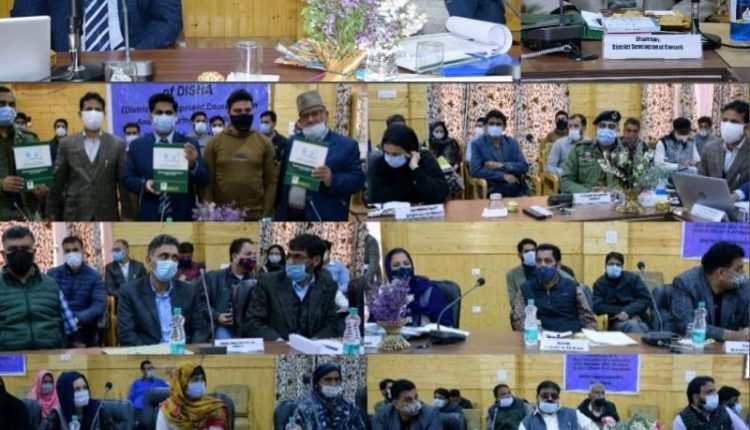 At the outset, the Deputy Commissioner gave a detailed presentation about the centrally sponsored schemes being implemented in the district. He highlighted the achievements and initiatives taken up by the district administration under different schemes.

He informed the meeting that during the last financial year District Hospital Bandipora was made functional from the complex besides G&b Hostel, Polytechnic College, Dak Banglow Dawar, other hospitals and 5 buildings were completed. He said the district admin macadamized and black topped a record road length of 119 KMS.

Dr Owais informed that one Receiving station is being inaugurated by Prime Minister on 16 April while work on 7 other projects is going on.

He also informed the meeting that 186 crores are being spent on Wular, to desilt it scientifically. He said work on various road projects is going on under CRF and PMGSY.

During the meeting, Lone took an extensive review of all schemes undertaken by different departments in the district especially in Health, Education and Public Works. District heads of various departments apprised the Member of Parliament about the status of different schemes taken up and their status as on date.

He asked all the officers to remain in touch with the people, pay regular visits and organize camps in all the remote and far-flung areas so that the people can avail maximum benefits of these schemes.

The meeting further discussed the issues in the Health sector in the district besides discussing macdamization of roads and irrigation issues.

DDC Chairperson, Vice Chairperson, BDCs and PRIs appreciated the efforts made by District Administration for effective implementation of various centrally sponsored schemes in the district on ground. They projected several demands on the occasion.

Underlining the importance of the PMAY scheme, Lone asked the officers to expedite the work on the scheme to provide houses to all beneficiaries. He asked the concerned to raise awareness among masses regarding Ayushman Bharat- SEHAT Scheme by mobilizing ASHAs, Anganwadi workers and PRIs in their respective areas and ensure that all the beneficiaries are covered under these schemes and receive golden cards.

After taking a thorough review of various developmental works undertaken in centrally sponsored programmes, Lone stressed to productively utilize the available resources so that the desired results are achieved.

Lone also sought feedback from the officers and urged them to identify all the bottlenecks, if any, so that appropriate measures are taken to sort out these within a time bound manner. He also assured all possible assistance and support to the district administration especially with regard to allotment of funds.