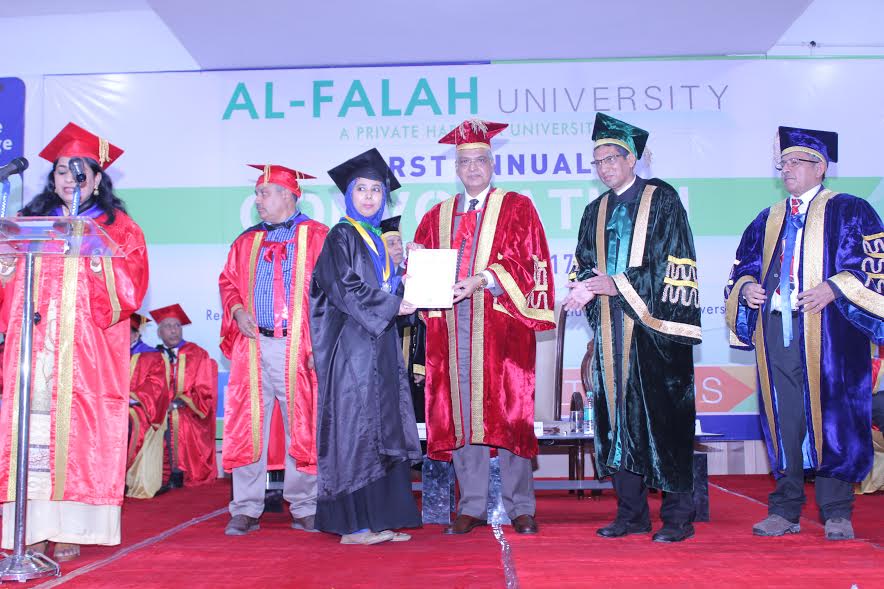 Gurgaon: The Al-Falah University, a State Private University created by an Act of Haryana Government (Act 21 of Haryana Legislative Assembly, 2014), held its 1st Annual Convocation on Monday the 20th March 2017. This university is one of the first universities which has introduced Choice Based Credit System under semester mode examination as per mandate of UGC and two year B.Ed and M.Ed programme as approved by NCTE.

It conferred the degrees to successful candidates, who appeared and passed the examinations, conducted in the year 2015 and 2016. 612 Graduate degrees, and 238 Post Graduate Degrees were awarded at the convocation that was held in Al-Falah University, Dhauj, Faridabad on 20th March from 11:00 AM.

Professor Furqan Qamar, Secretary General, Association of Indian Universities and former Vice Chancellor , Central University of Himachal Pradesh and Rajasthan University was the Chief Guest and delivered the Convocation adders. In his address he said that :-

He saluted the zeal of the founder and the chancellor Mr. Jawad Ahmad Siddiqui for his unwavering enthusiasm and commitment and tireless efforts in surmounting all these challenges and establishing this university.

He said that higher education in India has been faced with three eternal challenges.

The second challenge he said is to make higher educational institutions inclusive by making it accessible by all sections of the society.

The third and biggest of all is the challenge of ensuring quality and promoting excellence in higher education.

He said that the Al Falah University already has its strategies in this regard chalked out and is proactively working on them.

He motivates students & said that you must never get deterred by failures. You must protect yourself against negativity and pessimism. You must remain motivated and keep on acquiring knowledge and honing your skill.

Mr. Jawad Ahmad Siddiqui, Chancellor, Al-Falah University at the convocation said “It is a great pleasure and honour for me to deliver the presidential address of this prestigious institution the Al Falah School of Engineering and Technology which was existing for last 20 years is now upgraded into University has completed 03 years of its existence.

In the endless journey of an academic institution, this is a proud moment for Al-Falah University as it is the first convocation. I have no doubt that given the commitment of faculty, staff, and students, and the support we get from the Government, Al-Falah University will continue on the path of improving its education programme, leading to more successes and contributions to the society by its students and faculty.”

He also mentioned about the Awards and scholarships, the upcoming facilities and new courses at Al-Falah University.

He further revealed that “With respect to placements, this year again we kept up with our previous years’ strong performance with placement in top companies like HCL, Escorts, JCB, BSNL, Infosys, Wipro, Ericsson, ACE, JayPee, Samiah, Daksh and Mona Generators. They have visited Al-Falah University for campus recruitment offering the highest domestic salary.”

The ceremony was both magnificent and cordial. Around 500 nos. of people were present at the Convocation including University Professors, Deans, guardians and relatives of the scholars bestowed with the degree.

University of Nottingham: New Galaxy images reveal a fitful start to the Universe

University of Nottingham: University reinforces commitment to action on climate