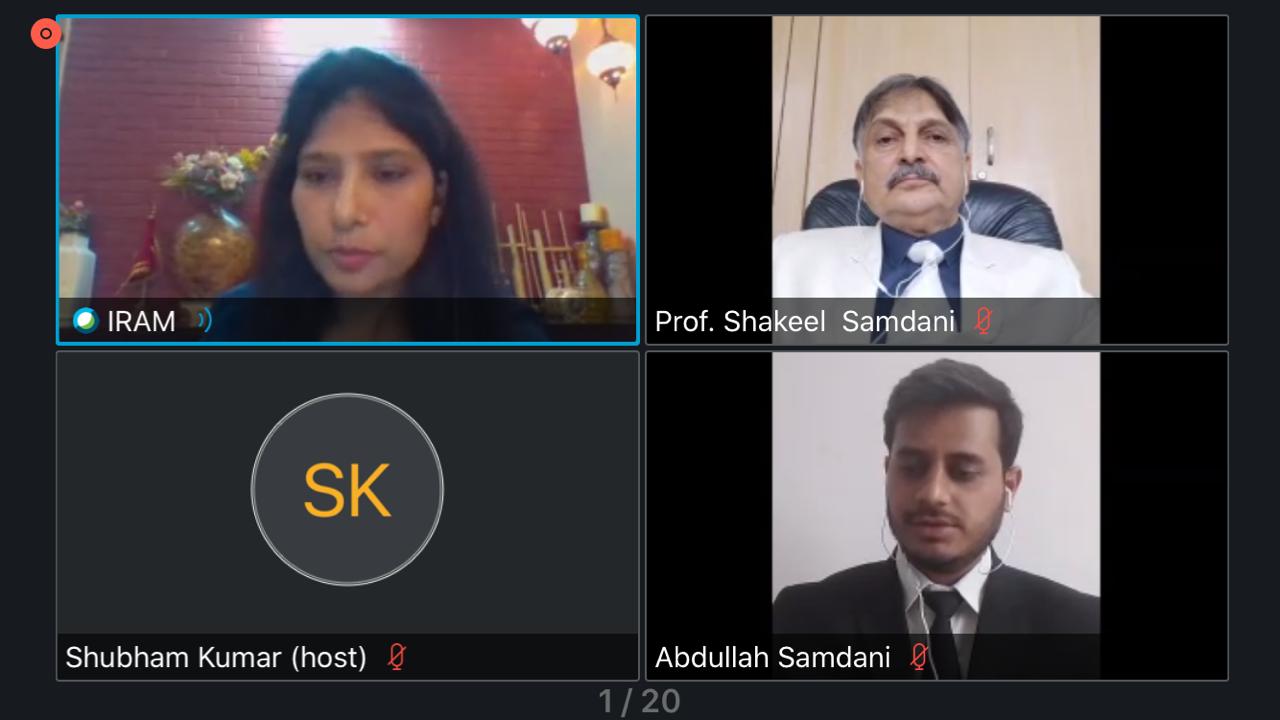 Aligarh: In order to acquaints the students with the job possibilities of Arbitration, the Law Society, Faculty of Law, Aligarh Muslim University organized a Webinar on “Role of Young Lawyers in Alternate Dispute Resolution”, 2020 in which Ms. Iram Majid, the main speaker (an alumnus of the Faculty of Law, AMU and the Director, Indian Institute of Arbitration and Mediation, New Delhi) explained various aspects to motivate the students

The event was moderated by Mr. Abdullah Samdani, Secretary, Law Society who welcomed the guest Ms. Iram Majid and thanked the faculty to organise such an inspirational event

Ms Iram began with the word of caution for students, “don’t pursue ADR as a career option on my persuasion, and take up what you are passionate about. It is for students to decide what to build, and customize topping their own choice.” She dwelled upon the nits and grits of ADR and emphasized that unlike litigation it has no jurisdictional boundaries. Citing the New York Convention to which India is a signatory with 193 other countries, she highlighted the diversity of career options in ADR both in terms of geographical area and job opportunities. ‘Arbitration is the game of richest’ she candidly, answered the question on how could ADR be compared with legal practice.

Ms Majid also shared her experiences of the various International Organizations such as Singapore International Centre, Chartered Institute of Arbitration, Dubai International Arbitration Centre and the like. She urged students to join all major National and International Arbitration and Mediation centers and to actively participate in Moot Court Competitions organized on law relating to ADR. Ms Majid also shared her journey from AMU to opening her own Centers of Arbitration in India and overseas. She also spoke on the history of ADR in India, evolution of the present A & C Act, 1996 and the key facets of the Amendments made thereafter. Stressing on the need for proper mentoring of law students and the early decision making as to one’s career option, she said “The sooner the better.” While concluding her address she informed participants that ‘In the present era network matters more than your work’ and was kind enough to offer all possible help to all the participants. Ms. Iram also thanked Prof. Shakeel Ahmed (Samdani), for giving her this opportunity to give back to her Alma mater.

Prof. Samdani further said that ADR was prevalent in ancient as well as medieval India and finally got codified during the time of British. Sharing his insights as a Family Law expert, he delineated on how ADR plays a pivotal role in expeditious disposal of matrimonial disputes. He discussed about ‘Darul Qaza’ Islamic Courts in India where Muslim matrimonial disputes resolved very quickly and the parties don’t have to pay any fees in this process. At last, he discussed that speedy trial for justice is a right of every individual and ADR is becoming a platform for achieving justice. He encouraged the people to use ADR as a mechanism of dispute resolution as the Indian courts are already overburdened with over 3 crore cases pending in them. He requested the participants to share their feedback and assured them of more webinars and online event opportunities in the coming months.

The webinar featured also many Faculty members including, Dr Tabassum Chaoudhary, Mr. Mohd Nasir, Mrs. Rabab Khan from the Department of Law, AMU. This webinar was also attended by participants from the United Kingdom, Iran and Palestine. The vote of thanks was proposed by Ms. Samreen Ahmed, Vice President of the Law Society.

AMU offices to open with hundred percent attendance from June 8