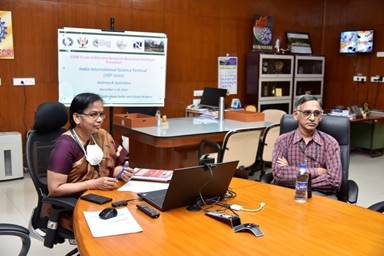 New Delhi: India International Science Festival (IISF-2020) is the largest ever science festival going to be held on virtual environment. In this festival, 41 events on different themes will be organised and these themes are directly related with the society and the general public. Young researchers and scientists are the key stakeholders of this science festival. The target audience of many of the events of IISF2020 is young scientists and students. Young Scientists’ Conference is one of such events. In this event, the participants think out of the box and produce and disseminate their ideas based on science and technology which can be useful in improving the quality of life and boost the national development.

To motivate the young scientists for their participation in large numbers and share their novel ideas, an outreach event (online) was organised recently by CSIR–Central Electrochemical Research Institute (CECRI), Karaikudi (Tamilnadu). The idea of this programme was to inspire the young scientists to highlight a few currently on-going research work of CSIR–CECRI scientists related to the fundamentals of advanced scientific tools and their applications in strategic sectors, corrosion studies and healthcare diagnosis.

The event commenced with a welcome address by Dr. M. Kathiresan, Scientist, CSIR–CECRI. Dr. N. Kalaiselvi, Director, CSIR–CECRI in her presidential address, emphasized on the importance of basic sciences and the contributions of young scientists towards advanced topics. She also mentioned the essential role of such young scientists’ conference that provides a platform for young scientists and youth to present their work and discuss among their peers. Dr. Kalaiselvi also introduced the Chief Guest, Prof. E. Arunan, Indian Institute of Science, Bangalore. Prof. Arunan delivered a special lecture on “Making weak bonds, breaking strong bonds and defining all bonds: Experiments with supersonic waves”. Prof. Arunan also explained the first of its kind indigenous facility Pulsed Nozzle Fourier Transform Microwave Spectroscopy that he along with his research group had developed over the years. His home-made facility fits well with the IISF-2020 theme on self-reliant India.

The event also had three lectures by young scientists of CSIR–CECRI. Dr. G. Sreedhar in his lecture titled “High temperature materials and advanced barrier coatings for strategic applications” presented the basic principles and engineering aspects of thermal barrier coatings that could find application in aerospace technologies and strategic sectors. The second lecture was delivered by Dr. V. Saranyan on “The use of surface analytical tools for contemporary corrosion monitoring” in which he explained the fundamental aspects of various probe microsocpic techniques like atomic force microscopy, scanning tunnelling microsocopy, scanning Kelvin probe and scanning electrochemical microscopy, and X-ray photoelectron spectroscopy. He highlighted the applications of such spectroscopic techniques in understanding the fundamental corrosion processes and in high resolution imaging. The last lecture was delivered by Dr. P. Tamilarasan on “Science in healthcare diagnostics”. In his lecture, he explained how various molecular spectroscopic techniques and electrochemical sensors are used in recognizing various biomarkers in health care diagnosis. He also highlighted the various electrochemical sensors developed at CSIR–CECRI and the role of data science in healthcare diagnostics. The event was attended by a large number of students, faculty members, research scholars and scientists.

Speakers said that India has an excellent tradition of science and it has always been in the forefront when it comes to scientific and technological advancement. The platform like IISF gives immense opportunities for students and it is not the time to restrict themselves to text book, they added.

‘Science Talk’ was presented by Dr. Radhakrishnan K. V., Senior Principle Scientist and HOD Organic Chemistry at CSIR-National Institute for Interdisciplinary Science and Technology (NIIST), Thiruvananthapuram on ‘Classical Health Traditions: Hints for Future Technological Development in Health Care’. He elaborated on various medicinal plants available in Kerala especially in the Western Ghats which is a rich source of plants with medical values. He called upon the students to come out of the rooms and explore the rich biodiversity India has and utilize it for the betterment of the society and world.

Dr. C. M. Joy who represented Vijnana Bharati (VIBHA), briefed about IISF 2020. He also explained about aims and objectives, the various components, and partners of the IISF 2020.

The Nation’s Science Channel ‘India Science’ has initiated the series of discussions and interactions with the experts, coordinators and scientists associated with the India International Science Festival 2020. India Science is an internet based 24X7 TV dedicated science channel which is an initiative of the DST, Govt. of India and implemented by Vigyan Prasar (An Autonomous Organisation of DST). On 17 December 2020, India Science telecast an exclusive discussion with the coordinators of the prominent events of the IISF 2020. The themes on which the discussion organized were International Science Literature Festival-Vigyanika, Guinness World Records, Health Research Conclave and Nav Bharat Nirman. Speakers who participated in this live discussion were Shri Hasan Jawaid Khan, Chief Scientist, CSIR-NISCAIR; Smt. Mayuri Dutt, Coordinator, Guinness World Records; Dr. Rajni Kant, Director, ICMR-RMRC, Gorakhpur and Dr. Sunil Agarwal, Scientist-E, DST.

All India Radio talked to the prominent experts about the IISF 2020. Shri Jayant Sahasrabudhe, National Organising Secretary, Vijnana Bharati said the salient points of the vision and major objectives of the science festival IISF. Dr. Gopal Iyengar, Scientist-G, Ministry of earth Sciences, Govt. of India said that National Institute of Ocean Technology (An Autonomous Organisation of the Ministry of Earth Sciences) will organize one of the events of IISF that is Clean Air. He explained this event and said that objective of this programme is to make the citizen aware of the emerging air pollution issues and their implications on our health and environment. Ministry of Earth Sciences is one of the key organizers of IISF 2020.

Another outreach programme was also organised by Lok Vigyan Parishad on virtual platform. Lok Vigyan Parishad is a voluntary organisation set up in 1984 aiming at popularizing science and technology in the society and making people innovative and research oriented. In this programme, Dr. Oum Prakash Sharma, Director, National Centre for Innovations in Distance Education, IGNOU was the key speaker. He said about the importance of scientific attitude among the students and common people to take rational decision in their lives. The other speaker Shri Kapil Tripathi, Scientist-F with Vigyan Prasar elaborated the philosophy of IISF. He said that all the events of IISF are directly connected with the society and public at large.

Fit India Cyclothon getting huge response, around 13 Lakh people participated in the first week of its launch