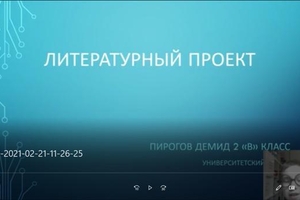 Students of the Department of Theory and Methods of Primary Education E. Pimenova, A. Kuzmina, A. Makarova, N. Zinkina, A. Kozhevnikova, T. Simonova in practice together with students of the University Lyceum, 27, 46 and 48 schools of the city took an active part in the All-Russian Children’s Book Week – 2021.
March – April of this year was fruitful for the cooperation of the Institute of Pedagogy and Psychology with the libraries of our city.

The advertising messages about interesting books created by students of primary schools served a good cause: they contributed to the expansion of the reader’s horizons not only of classmates, but of all schoolchildren of Karelia who are interested in books. The National Library’s Children’s Reading Center received videos, presentations, drawings, reviews of books that can be used in working with children.

On April 2, 2021, on the birthday of G. H. Andersen and the International Children’s Book Day, on the initiative of the Petrozavodsk centralized library system and with the support of the Library Association of Karelia, the annual City-wide action “The City Reads to Children” was held. To support children’s reading, to draw attention to children’s books, to make reading the rule of every child’s life – these are the tasks that librarians and their volunteer assistants set themselves by participating in the action.

2021 in our republic has been declared the Year of Karelian runes and the main theme of the action “The City Reads to Children – 2021” was chosen epic songs of folk poetry of Karelia. More than 40 reciters read the runes at almost fifty sites in the city.

Among the readers was Elizaveta Ivanova, a freshman of the Department of Theory and Methods of Primary Education. She visited sixth-graders at school no. 6 and at the playground organized for children at the Lotus Plaza. Answering the question about what impressions remained from participation in the events, Lisa said:

The most pleasant impressions. The guys are great. They conducted a dialogue during the lesson, asked questions if something was not clear to them, and solved riddles related to the Kalevala.

The material was prepared within the framework of the PetrSU department at the Children’s Reading Center of the National Library.

Job Fair at the Medical Institute

Day of Unified Actions at PetrSU