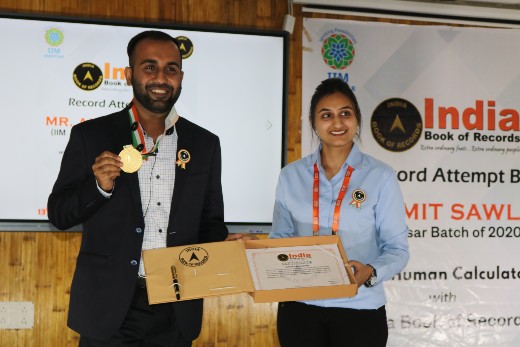 Amit Sawlani Sets His Name In India Book Of Records

Amritsar: In an attempt to create a new national record in quick calculation, Mr. Amit Sawlani, MBA-06 Batch, IIM Amritsar, succeeded in amazing the adjudicator and audience, setting two new records in the prestigious India Book of Records. Mr. Sawlani now holds the record for speaking the mathematical tables of any number from one to one thousand the fastest, clocking a time of 3.95 seconds, and speaking the tables of 25 different two-digit numbers, in just 2 minutes and 54.15 seconds.

Amit is a “Human Calculator” as he can perform mathematical calculations even faster than a calculator. He has showcased his talent in India’s Got Talent Season-8. According to him, he is able to achieve this feat of speaking the multiplication tables of 25 different numbers by dividing his brain into 25 equal parts and controlling them. The videos of him showcasing this amazing talent got to the notice of the concerned authorities, and the record setting attempt was scheduled at IIM Amritsar auditorium on 13th November. Ms. Leesha Aggarwal from India Book of Records adjudicated the event, which was graced by the faculty members, staff, and students of IIM Amritsar, along with various media personnel.

“Concentration is key in achieving feats of this complexity.” says Amit. When he is not practicing with stopwatches, he meditates and tries to clear his mind. This practice of utmost focus and concentration is what helped him in achieving success of this scale. His penchant for tables started at the age of 6, when he took the multiplication tables of his sister 3 years elder to him. He then started speaking the multiplication tables of numbers in his mind, and that habit has continued ever since, ultimately culminating in etching his name in India Book of Records.
Prof. Mukesh Kumar, Media Chair, IIM Amritsar, said in his welcome address that it was a remarkable day for all present, that they would be getting to witness an event of this propensity up close. The event culminated with the adjudicator Ms. Leesha Aggarwal congratulating Mr. Sawlani and handing him the medal of achievement.