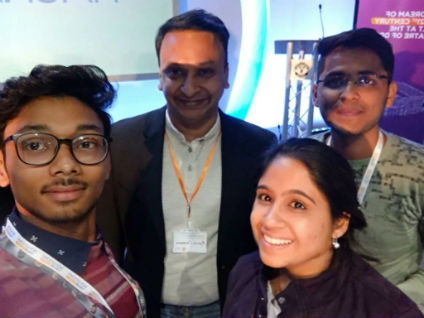 Aligarh: There are stories of achievements and successes, but this is special. Team ‘ZHCET_WARRIORS’ which had Anushka Chawla and Aman Varshney, computer engineering students from the Zakir Husain College of Engineering and Technology (ZHCET), Aligarh Muslim University (AMU) brought laurels by reaching the final round of United HCL Hackathon, hosted at Old Trafford, home to Manchester United Football Club.

They were able to impress upon judges, who are high ranking executives from the Fortune 500 companies by giving digital solutions to the problems posed by the world’s biggest brands in the form of mobile/computer applications and software programmes. ‘ZHCET_WARRIORS’ coded their final idea in allotted time of 18 hours.

In the initial rounds of the competition, the AMU team submitted their idea of ‘Finder Buddy: A Procurement Bot’ (Software Application that runs automated tasks over Internet along with a working prototype developed as per requirement of NBC Universal).

Prof M Sarosh Umar (Chairperson, Department of Computer Engineering, and ZHCET) informed that the trip was sponsored by HCL Technologies and Manchester United. He added that this participation at an International platform has given immense exposure to the team members and motivation to other AMU students who hold potential to create ‘world’s biggest open innovation model’ that other countries can replicate.

He also said that during the competition, Anushka Chawla and Aman Varshney were mentored by business leaders for collaborating on building solutions.