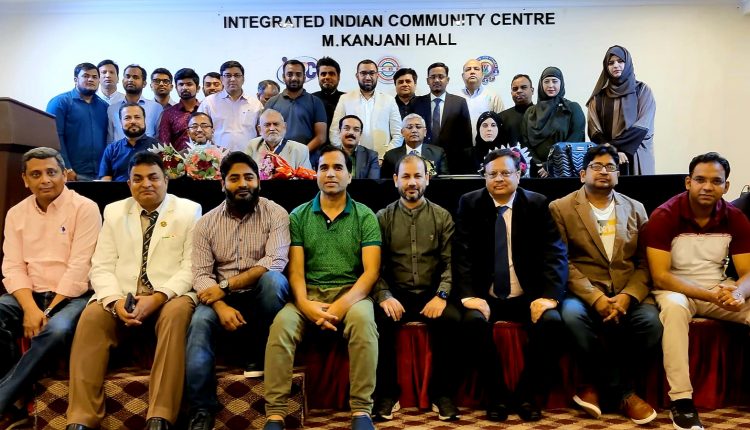 Doha: The Aligarh Muslim University Alumni Association Qatar (AMUAAQ) an Associate Organization (AO) of ICBF Under the aegis of the EMBASSY OF INDIA organised interactive discussion on importance of Interfaith Dialogue.The activity happened as a part of “Azadi Ka Amrit Mahotsav” on 25th May 2022 (Wednesday) in association with Jamia Millia Alumni & AMUAQ Toastmasters club with the theme “promotion of peace & social cohesion” at Kanjani hall Integrated Indian community centre, Doha.
Speakers & scholars of various faiths spoke on the topic, “Role of Interfaith Dialogue in promotion of peace & social cohesion”. Scholars who spoke at event included Chief Guest Dr Zafarul Islam Khan, journalist and ex Chairman of Delhi’s minorities commission and Guest of honour Dr Sabrina Lei an Italian scholar who was awarded for her promotion of interfaith work in Europe in recently concluded Doha Interfaith Dialogue Conference (DIDC) 2022. The session was presided by Mr Abraham Joseph who headed IDCC, an umbrella body that oversses Indian Churches in Qatar. ICBF president, Mr Vinod Nair and Professor Dr Bahauddeen Mohammed Nadvi, Vice Chancellor of Darul Huda Islamic University were special guests who spoke on the occasion. The meeting was conducted by Dr Nadeem Zafar Jilani, President of AMU Alumni Association Qatar.
Dr Nadeem Jilani in his opening remarks emphasised the importance of interfaith dialogue in current scenario to combat growing religious intolerance and hatred across the globe. Mr Vinod Nair lauded the initiative of AMU Alumni Association Qatar which is an associate organisation of ICBF in bringing representatives of various faith communities together and hoped that more such meetings will be held in future. Mr. Nair also briefed some examples that during pandemic peak time one of the case Mr. Jawed Ahmad president AMUAAQ by that time tackled with us and embassy to send one departed soul from Kuwait to India via Doha, all documentation Via Indian govt & Indian embassy managed by Mr. Ahmad and finally remains delivered to india after 10 days , to get the exemption/approval we worked together day & night top of the religion and set the example of true humanity.
Dr Sabrina Lei who has translated over 50 Islamic classics into Italian was received on stage by Dr Ashna Nusrat and welcomed with flower bouquet. She spoke about how she and her husband, who is also an AMU alumnus, through “Tawasul Institute” are spreading awareness about Islam in Italy and dispelling misconceptions.
Dr Nadvi who is ranked amongst top 500 influential Muslims across the world, spoke about all humans being children of Adam & Eve and need to focus on what is common among various faiths rather than on differences.
Dr Zafarul Islam Khan said that a true religious person of any faith will not harbour ill will towards other fellow human beings. It is the politicians and vested interests including clergy that uses religion to divide people for political gains. He regretted that Muslims have not been able to present the true picture of Islam or counter the false propaganda against past Muslim rulers in the context of India.
Mr. Abraham Joseph in his presidential address lauded the initiative of AMU Alumni Association Qatar in choosing an apt & relevant topic and emphasized the need for the communities to come together and promote understanding & respect for each other’s beliefs.
Jawed Ahmad Chairman AMU Alumni Association Qatar and President Toastmaster club of AMU Alumni Qatar said in discussion “It was really very important talk show where we understood how important it is to take care and strengthen our relations with neighbors and friends of any religion .He also stated that the need for consistent discussion to promote peace and harmony and take stand for the vulnerable in all communities and bring fair , just and inclusiveness in society. It is important that we understand each other’s pain and grief, “Peace and unity is coexistent”
The meeting also saw a lively Question/Answer session with the audience at the end. Many prominent figures from the community and heads of various social organizations participated which included Mr. Nadim Asrar (former AMUSU President), Mr Najmul Hassan, President JMI Alumni Association, Mohammed Bahauddin Khan, Mr. Faisal Hudavi, Prof. Javed Zaidi, Mr Rizwan Ahmad, Er. Mohhamed Farman Khan, Er Mamnoon Bangash, Mr. Yasir, Mr. ashraf, Mr Aftab Hussain, Mr Khalid Saifullah, Syed Shahabuddin, Mr Mohammed Irfaullah, Mrs Mahjabeen Hussain, Mr Mohammed Nayeem Amaan and Mr Abad Khan.
In the end Dr Nadeem Jilani thanked guests, the audience and executive members of AMU and JMI Alumni Association Qatar for their participation & support.

Graduating seniors and an alumna win fellowships for study in the U.K.

University of Cambridge: Secret to treating ‘Achilles’ heel’ of…

University of Cambridge: Reducing TV viewing to less than one hour a…

University of York: New hub to empower entrepreneurs and improve…