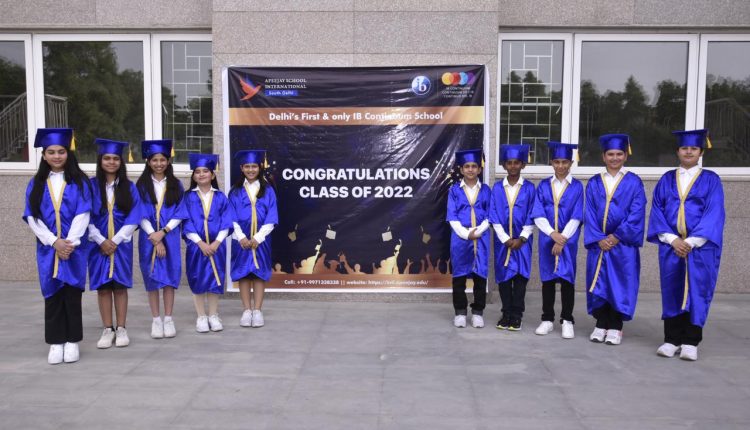 The Chief Guest of the day was Mr. Anil Swarup, Former Education Secretary of India. He has also served as Coal Secretary of India. He is the Founder-Chairman, Nexus of Good, a non-governmental organisation. Dr. V. S Garg, Senior Education Advisor at Apeejay Education, graced the occasion as Guest of Honour.
The event began with the ceremonial lamp lighting and an invocation song. The auditorium reverberated with several rounds of applause with the entry of graduating students, wearing convocation outfits. A special video presentation was made to take the audience through the journey of the DP and PYP students.
Speaking at the occasion, Mr. Anil Swarup said: “It is a pleasure to be here today because youngsters give us hope and energy. They are the light of our country and I must tell them that failure is their biggest teacher. Those who fail and learn are the ones who succeed in life.”
Purshottam Dutt Vashist, Principal, Apeejay School International, said “It is a momentous day as the first badge of graduates from Apeejay School International are ready to spread their wings. We are guided by the vision of our inspiration, Dr. Stya Paul Ji, whose legacy is now being carried forward by his daughter, Mrs Sushma Paul Berlia, Chairman, Apeejay Education.
Apprising the audience about the recent developments and achievements of the school, students Saanvi and Rosanne presented the school report. They highlighted school achievers at inter-school, national and international levels and spoke about special assemblies, celebration days, guest lectures and non-governmental organisation tie-ups of the school.
Dr. V.S. Garg, said that Apeejay School International, South Delhi is the first and only comprehensive international day boarding school in the capital city with state-of-the-art infrastructure and excellent sporting facilities. He added, “More such schools from Apeejay Education are on the anvil.”
Lavanya Sharma of DP 2 received the most prestigious ‘Valedictorian Award’ for academic excellence. Rishit Manoj Sharma and Prisha Jain received ‘Student of the Year’ awards for their achievements in academics and co-curricular activities.
Also present on the occasion were Ms. Ritu Mehta, Director of New Schools at Apeejay Education, Mr. Sandeep Kathuria, Principal, Apeejay School, Panchsheel Park and Ms. Komal Nathani, Headmistress, Rhythms Kinderworld School, Greater Kailash –II.