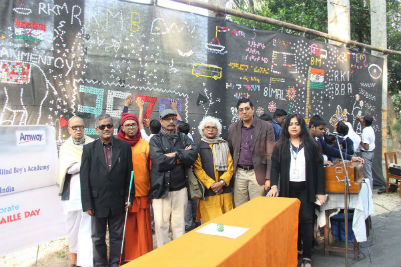 In Narendrapur, Amway organized a six-day workshop in collaboration with the Ramakrishna Mission Blind Boys’ Academy starting from 4th January 2018. The main highlight of the workshop was the creation of a magnificent piece of artwork on a huge canvass measuring 3.5 x7.8 m by the visually impaired students. The artwork was based on the theme ‘Kids Guernica for Peace’, which is a decade old initiative celebrated around the world to spread the message of peace and coexistence. The mural will be exhibited at Hiroshima, Japan on 6th August, 2018 on the occasion of Hiroshima Day. Narendrapur Ramakrishna Mission Blind Boys’ Academy is the only Blind School in the world to be participating in this celebration of world peace with this artwork showcasing world peace and coexistence.
Asit Poddar, an acclaimed painter, flagged off the workshop while visually impaired students followed him by creating a huge mural using various tactile materials. The workshop also witnessed an active participation of Amway direct sellers and employees who whilst being blindfolded created different art forms on the canvas. The mural has been shared in the social media for creating awareness among people about the efficacy of visually impaired students.

Chandra Chakraborty, Regional Manager, East, Amway India said, “We have been working tirelessly towards the welfare of the visually impaired with a firm belief that education is the key to the future that create opportunities transcending physical limitations. We hope that our support will inspire the students of Ramakrishna Mission Blind Boy’s Academy to excel in different aspects of life and showcase their talent in different forums.”

“I wholeheartedly thank Amway India for encouraging us to undertake this workshop where the employees and direct sellers participated enthusiastically with our students and teachers to create the mural. This engagement truly embodies the spirit of coexistence that ran as the leitmotif throughout our workshop”, commented Biswajit Ghosh, Principal, Ramakrishna Mission.

· Amway India’s CSR initiatives are based on the belief that social responsibility is much more than the incurrence of a cost or a resource on a charitable/ philanthropic act of social benefit. It is an opportunity to bring in social innovation and change. This belief is articulated in Amway’s vision of helping people live better lives. When it comes to commitment to corporate citizenship, Amway India makes a serious and concentrated effort to reach out and help people improve their lives.

· Amway India supports a comprehensive CSR programme covering a gamut of initiatives including a water conservation project to improve the ground water level in 7 villages in the Dindigul district located around the manufacturing plant. Amway Opportunity Foundation launched a village health program targeted at 26 villages in the Dindigul district, to provide quality healthcare to the underprivileged. A total of 144 health check-up camps (12 camps in a month) are being conducted within a span of 12 months. The treatment includes general health check-up, select pathological tests and medicines at zero cost to the beneficiaries.

· As a key focus area, Amway has taken various initiatives to support the cause of visually impaired. Amway also supports underprivileged children in education, health and hygiene under a project titled ‘Sunrise’. Under this project, the company currently supports more than 15 NGOs across the country.

· Community Health and Entrepreneurship Program:Amway has been promoting self-employment among women community health facilitators. Under this initiative, the underprivileged women are provided with training on entrepreneurship skills and business fundamentals to enhance affordable healthcare outreach program in few underserved rural areas of Bihar and Uttar Pradesh.

HKU confers honorary degrees upon seven outstanding individuals at the…