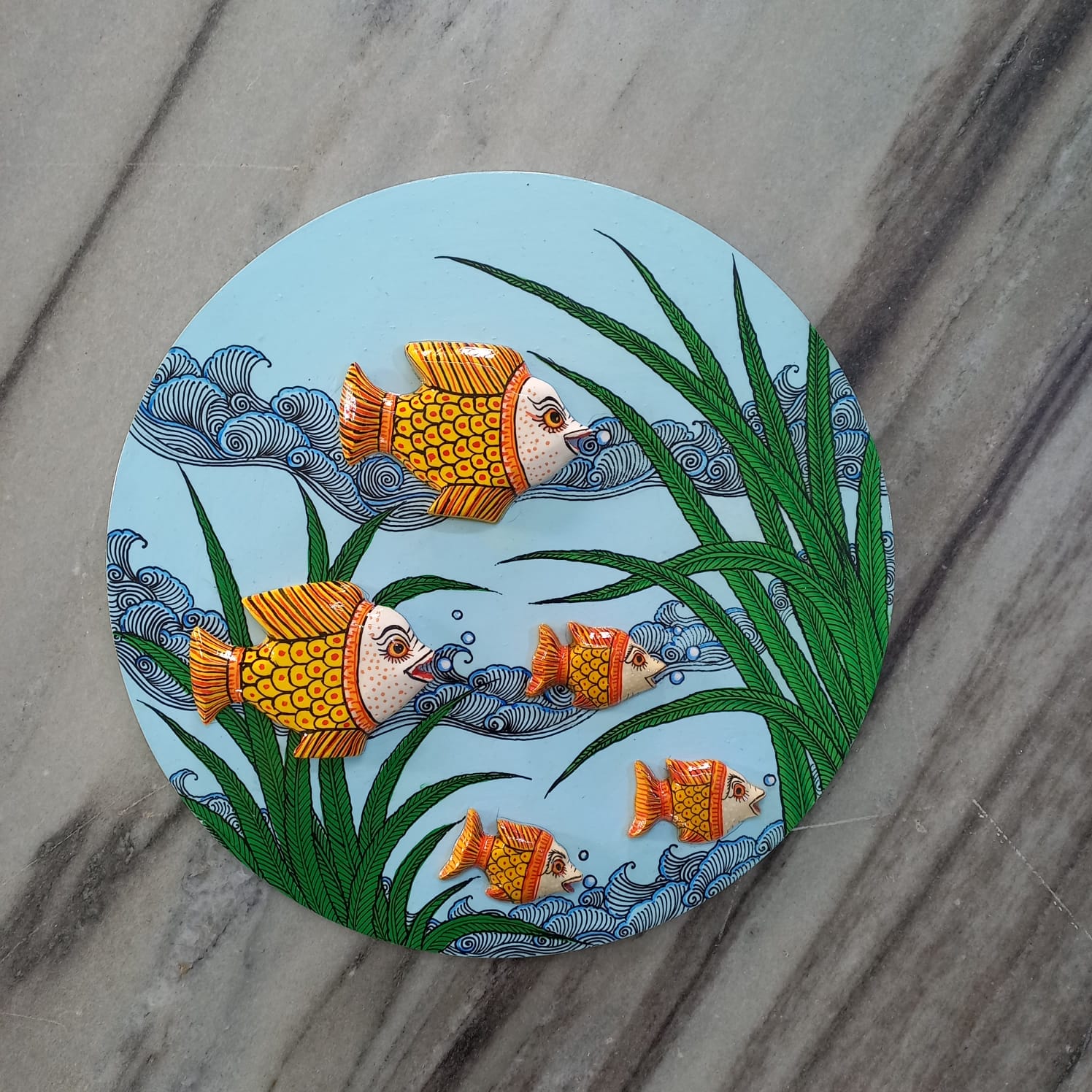 New Delhi: Art Tree aims to preserve and promote the legacy of traditional Indian art and crafts the origins of which can be traced to prehistoric settlements in the 3rd millennium BCE. Titled Pravaah-A Journey, our show will be on during Shravan month of the Hindu Saka calendar, and will have ‘Water’ as its theme. The artworks will be on display from 17th – 21st August at the Open Palm Court, India Habitat Centre, New Delhi from 11 am -7 pm.

The forthcoming attraction is another attempt at our continuing an unremitting journey towards achieving our overall motto of inclusiveness. Water being one of the most important aspects of life, will be the highlight of our exhibition. The distinguished artists displaying their rare works will be: Manisha Jha and Manoj Choudhary in Madhubani; Purna Chandra Moharana and Tanmay Mahapatra in Pattachitra; Prakash Joshi in Phad; Mohan Verma and Ashutosh Verma in Sanjhi; and Anil Wangad and Sarita Vanjara in Warli.

Announcing the art show, Pragatii Agarwal, Founder- Art Tree said, “One of the most vitalizing and life-preserving sources of life, water is the most precious natural resource and supports all human, plant and animal life. Manifesting itself in various forms, water from the seas and rivers remains a recurring theme in Indian mythological art and culture.’ Pravaah- a Journey’ is an endeavor to bring forth the various attributes of Water that the eclectic mix of artists will be bringing out in their works. We are very happy to have found a motley mix of artists belonging to different art forms who offer us extensive and varied creations from their oeuvre.”

Water symbolizes purity and cleansing; and this is more apparent in historical, ancient and renaissance pieces of art. The depiction of water is universal in almost every form of art worldwide. In both literature and art, water is considered the universal symbol for change – it is forever flowing, and can take any course.
Pravaah too will emphasize and underline the dynamic energy that water signifies and epitomizes.

Widely acknowledged for its traditional art forms and crafts, Indian folk art has been handed down from one generation to the next without altering its cultural and traditional vibrancy. Each region is known for its own unique form of folk art and has its distinctive style. The Indian folk arts are very ethnic, simple, yet vibrant, and colourful to talk about the rich heritage of the land. Some of the most talked about Indian folk traditions have had cultural and religious influences on their way to modern times, and continue to generate immense curiosity and interest among the connoisseurs of the world of art. The five art forms that will be on display too have enjoyed tremendous patronage both in the domestic and international market. This exhibition is the perfect way to showcase their works together to encapsulate the spirit of theme on water. It will give visitors the chance to experience more of the rich practices that have stood the test of time and form our splendid heritage.

Short note on 5 Art forms at Pravaah – A Journey:

MadhubanI Painting, also known as Mithila Art, is a style of Indian painting practiced in the Mithila region of Bihar and the adjoining parts of Terai in Nepal. In the modern times, Madhubani paintings are made using fingers and twigs, as well as matchsticks and pen nibs and are conventionally based on mythological, folk themes and pastoral symbols. Lately, geometric patterns can also be seen in these pictures that often symbolize love, valour, devotion, fertility and prosperity.

Pattachitra is one of the oldest and most popular art forms of Odisha, and has evolved from the Sanskrit words ‘patta’ (canvas) and ‘chitra’ (picture). The nomenclature meaning ‘cloth-picture/painting’ in Sanskrit, is a generalised term used to describe a style and format of painting with origins in Odisha and West Bengal. The most interesting feature of this form are the themes that are chiefly based on Lord Jagannath and Radha-Krishna, different Vesas of Shri Jagannath, Balabhadra and Subhadra, temple activities, the ten incarnations of Vishnu based on the ‘Gita Govinda’ of Jayadev, Kama Kujara Navagunjara, The Ramayana, and The Mahabharata.

Phad
A 700-year-old legacy passed down over generations within a single family, Phad finds its origins in Shahpura, near Bhilwara, Rajasthan. Phad is a type of scroll painting that narrates elaborate religious stories of local deities and gods. Created as travelling or mobile temples, these traditional paintings were carried by priest-singers of the Rabari tribe, called Bhopas and Bhopis, who would sing and perform stories of their local deities – Devnarayanji (a reincarnation of Vishnu) and Pabuji (a local hero).

Sanjhi
A rare art from Braj, the word ‘Sanjhi’ means evening or dusk and is more of an expression of the devotional love that was unveiled in the temples. It is said to have originated at the time of Lord Krishna when Radha and Gopis too used to create beautiful patterns out of leaves and flowers creating decorations for Krishna to impress the lord. Subsequently, the art grew in the 16th and 17th centuries when the walls and floors of temples were decorated with Sanjhi.

Created mostly in white with the occasional dash of red or even yellow – Warli artwork is an art form that originated from the indigenous tribes of the coastal areas of Maharashtra and Gujarat where women are mainly engaged in the creation of these paintings. Beautifully executed on the walls of the huts, the paintings are mostly a combination of geometric shapes including squares, circles and triangles representing the elements of nature. They depict social life and images of human beings and animals, along with scenes from daily life that are created in a loose rhythmic pattern.