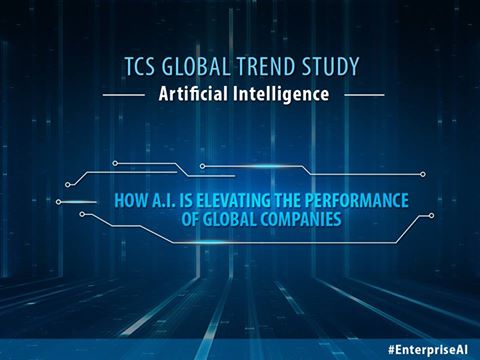 Artificial intelligence to have dramatic impact on business by 2020, according to TCS Global Trend Study

Mumbai: Tata Consultancy Services (TCS) (BSE: 532540, NSE: TCS), a leading global IT services, consulting and business solutions organisation, today unveiled its Global Trend Study titled, ‘Getting Smarter by the Day: How AI is Elevating the Performance of Global Companies’. Focused on the current and future impact of artificial intelligence (AI), the study polled 835 executives across 13 global industry sectors in four regions of the world, finding that 84 percent of companies see the use of AI as “essential” to competitiveness, with a further 50 percent seeing the technology as “transformative”.

Widespread AI adoption expected across job functions
Exploring the views and actions of decision makers from global companies with average revenues of $20 billion, the study revealed AI is spreading across almost all areas of a company. The biggest adopters of AI today are, not surprisingly, IT departments, with two-thirds (67 percent) of survey respondents using AI to detect security intrusions, user issues and deliver automation. However, by

2020, almost a third (32 percent) of companies believe AI’s greatest impact will be in sales, marketing or customer service, while one in five (20 percent) see AI’s impact being largest in non-customer facing corporate functions, including finance, strategic planning, corporate development, and HR.

University of Bristol: Smoking during pregnancy may not…

As for the ongoing debate regarding AI’s impact on jobs, business executives in the study estimated net reductions in each function by 2020 of between 4 percent and 7 percent. However, companies with the biggest revenue and cost improvements from AI see the need for at least three times as many new jobs in each function by 2020 because of AI, as compared to companies with the smallest AI-related revenue and cost improvements. AI is already being used to automate certain processes and drive efficiencies, help employees be more productive and devote more time to more strategic business needs, and create new work and services that were not possible in the past.

“As companies begin to gain a better understanding of AI’s application for business, they will realise the significant impact of this transformative force. This is reflected in our Global Trend Study, which shows that forward-thinking companies are beginning to make major AI investments,” said K Ananth Krishnan, chief technology officer of TCS. “Given the increasing digital disruption across every industry and the public sector, AI should become a key and integrated component of an organisation’s strategy.”

AI investments and returns rising; North America and Europe lead the charge
As AI becomes a mainstream technology, financial investments in AI are set to rise, as 7 percent of companies each earmarked at least $250 million toward AI in 2016 and 2 percent already plan to invest more than $1 billion by 2020 – likely looking to gain a competitive advantage as early adopters.

The Global Trend Study revealed a clear correlation between investments in AI and business impact. The companies that realised the greatest AI-related revenue improvements and cost reductions spent five times more on the technology than the companies with the lowest AI-related revenue and cost improvements. In turn, leaders generated average revenue increases of 16 percent from AI initiatives in 2015 versus 2014, whereas laggards saw a modest 5 percent revenue growth. At a regional level, North American companies were the leading investors in AI in 2015, with an average per-company spend of $80 million, followed by Europe with $73 million, Asia-Pacific with $55 million and Latin America with $51 million.

Cyber security top of mind when adopting AI
Executives participating in the Global Trend Study across all regions and sectors rated the top four factors as most important to AI gaining widespread acceptance and driving business benefits. Almost seven out of 10 (68 percent) companies currently use AI to detect and prevent potential hacks and security threats to their systems. And moving forward, the other key factors include developing cognitive systems that continually learn, have the ability to make reliable and safe decisions based on masses of data, and gain the confidence of managers to trust what AI is advising them to do.

Artificial Intelligence is the need of the hour: ASSOCHAM-PwC study

Texas A&M: The 1 In 10 U.S. Doctors With Reservations About Vaccines Could Be…

University of Bristol: Smoking during pregnancy may not cause ADHD in children…

iednewsdesk Apr 7, 2022
A new systematic review and meta-analysis published in the scientific journal Addiction and led by University of…