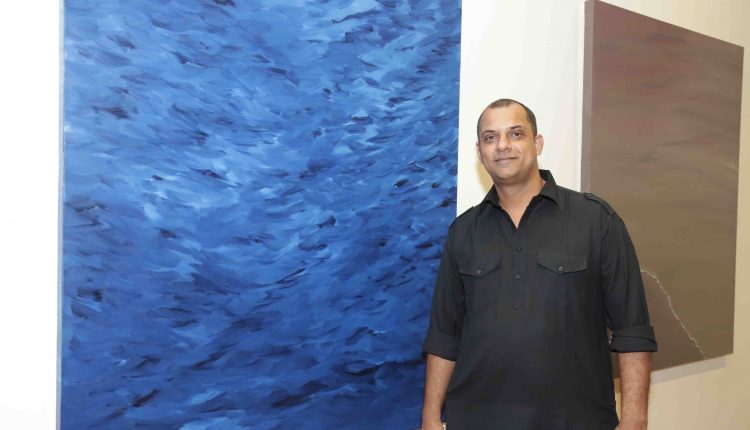 New Delhi  : Artist Divyaman Singh presents his works with oil on canvas in a solo exhibition titled, ‘Esoteric’ on Saturday, March 5th, 2022 at The Stainless Gallery, New Friends Colony, New Delhi. The exhibition will be on display at the gallery on March 6th and 7th, 2022 from 11am to 7pm.

Through his artworks, Divyaman Singh depicts a collective conscience’s journey: from despair to hope and living in harmony with elements around us through the pandemic. With an undertone of mystique of the universe that the human mind is yet to unleash his creative works meander around the contrasts and connection that supreme elements like the cosmos, the oceans draw with respect to human beings who are miniscule tiny specks on the face of the planet, yet possess profound and unexplained capabilities to emote, endure and accept.

The two years of pandemic have left their impact on one and all in different ways, Divyaman Singh too is not untouched by it and that can be seen as one travels through the rhythm of his paintings. Stories of convoluted thoughts, deserted hearts and streets in the midst of nature finding its ground yet again, flourishing and rejuvenating are showcased in this series.

As he looks forward to unveiling his artworks to his audiences on Saturday, Divyaman Singh shares his thoughts saying, “Through Esoteric I have touched different zones that ultimately bind into one big chapter called life and its dynamic nature. It portrays the undeterred will of humans that makes him sail through tough times and embrace life as is & not as it was thought to be. It is a depiction of how powerful we are as a creation yet mere specks when compared to the universe and beyond; still holding resemblance in the way the thread of mysteriousness that passes through every element that exists, including us. I am sure my artworks will resonate with my audiences because we all have lived through the uncertain, obscure times together.”

Esoteric is a series of unpretentious yet profound paintings that are easy to connect with and push us towards celebrating elements and people alike.