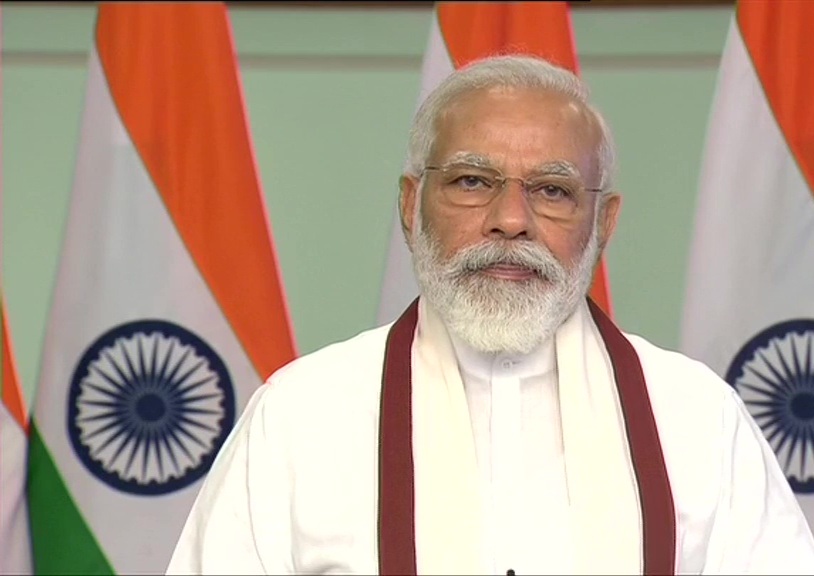 Speaking on the occasion, the Prime Minister said that Dr. Joseph Mar Thoma has devoted his life for the betterment of our society and nation. He remarked, “Dr. Joseph Mar Thoma has been particularly passionate about women empowerment and removal of poverty. The Mar Thoma Church is closely linked with the noble ideals of Saint Thomas, the Apostle of Lord Christ.”

The Prime Minister said that India has always been open to spiritual influences from many sources. Quoting Dr. Joseph Mar Thoma “Humility which is a virtue, is always fruitful in good works”. PM said that it is with this spirit of humility Mar Thoma Church has worked to bring a positive difference in the lives of our fellow Indians, especially in areas such as healthcare and education. He said that Mar Thoma Church played a significant role in India’s freedom struggle and was at the fore-front of working towards national integration.

The Prime Minister said that COVID-19 is not only a physical sickness that is a threat to the lives of people but also takes our attention to unhealthy life-styles. He said that a global pandemic implies that humanity as a whole needs healing and asked the audience to do everything possible to further harmony and happiness in our planet. He said that powered by Corona warriors, India is firmly fighting COVID-19.

The Prime Minister said that due to lockdown, many initiatives taken by the Government and a people driven fight, India is much better placed than many other nations and India’s recovery rate is rising. Due to this the severity of the virus is less than anticipated. He highlighted that India’s death per million due to Covid is under 12 compared to 574 per million in Italy. He added that the figures in America, Britain, Spain, and France are also much higher than India. He said that lakhs of villages, home to 85 crore people, remain almost untouched by Coronavirus.

He said that people driven fight against COVID-19 has given good results so far and stressed that we should not let our guard down. He said that we have to be even more careful now and wearing masks, social distancing, ‘दो गज की दूरी’, avoiding crowded places, remains more important now.

In the last few weeks, the Prime Minister said that the Government of India has addressed both short-term and long-term issues relating to the economy. He said that people-friendly and growth friendly decisions have been taken in the sectors from the sea to space, from the farms to the factories. He hoped that the call for Atma Nirbhar Bharat, self-reliant India will ensure economic strength and prosperity for every Indian.

Speaking about the recently introduced Pradhan Mantri Matasya Sampada Yojana, the PM said that this scheme with an investment of over Rupees Twenty Thousand Crore is going to transform the fisheries sector, increase export earnings and provide more employment to over fifty five lakh people. He said that better technology and infrastructure to ensure making value chains stronger. He expressed confidence that fishermen in Kerala will gain from various schemes.

The Prime Minister said that the historic reforms undertaken in the space sector will ensure greater use of space assets and activities. Access to data and technology will improve. He added that several youngsters in Kerala and particularly in South India who are taking a keen interest in science and technology will gain from these reforms.

The Prime Minister said that the Government is guided by sensitivity and a long-term vision to make India a growth engine. He said that decisions are taken not from comfortable Government offices in Delhi but after feedback from people in the ground. This has ensured that every Indian has access to a bank account, over 8 crore families have access to smoke free kitchens, over 1.5 crore houses have been given to the homeless and India is also home to the largest healthcare scheme in the world, Ayushman Bharat.

The Prime Minister said that for the poor, bringing one nation-one ration card scheme helped them in getting their rations wherever they are. For the middle class, a number of initiatives were brought, to boost Ease of Living. For farmers, MSP has been increased and made sure they get the right price. For women, it is ensured that their health gets due attention via various schemes and their career path is not compromised through extension of maternity leaves.

The Prime Minister said that the Government of India does not discriminate between faith, gender, caste, creed or language and is guided by the desire to empower 130 crore Indians and our guiding light is the Constitution of India.

He called for pondering on how our actions can contribute to national development. He said that today India is saying – we will produce locally and also buy local products. This will light the lamp of prosperity in the homes of many.

The Malankara Mar Thoma Syrian Church, also known as the Mar Thoma Church, is one of the ancient, indigenous churches in Kerala. It is traditionally believed that Saint Thomas, a disciple of Jesus Christ came to India in AD 52 and established the Church. The Church is presently headed by their 21st Malankara Metropolitan, Rev. Dr. Joseph Mar Thoma, who has headed the Church for the last thirteen years. The Mar Thoma Church has upheld democratic values and spirit of nationalism, during the Indian Independence struggle and thereafter during the Emergency period. The Church is committed to serving humanity and runs various social welfare institutions, destitute homes, hospitals, colleges, schools and technical institutions. During times of crises like earthquake, flood, tsunami etc. the Church participated in relief and rehabilitation activities in various States.

LAWDA starts scientific extraction of Lily to stop its regrowth