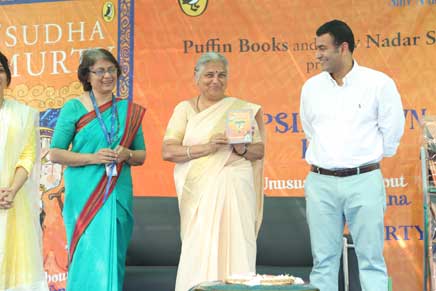 Gurugram: Award-winning author, philanthropist and Padma Shri awardee, Sudha Murty released her new book ‘The Upside Down King’, a collection of tales on the two most popular avatars of Lord Vishnu-Rama and Krishna and their lineage. The book was unveiled amid the presence of students of Shiv Nadar School, Gurugram (a not-for-profit initiative of the Shiv Nadar Foundation in K12 education).

Sudha Murty is a prolific writer in English and Kannada. She has written novels, technical books, travelogues, collections of short stories and non-fiction pieces, and six-bestselling books for children. Her books have been translated into all the major Indian languages. Sudha Murty is the recipient of the R.K. Narayan Award for Literature (2006), the Padma Shri (2006) and the Attimabbe Award from the Government of Karnataka for excellence in Kannada literature (2011). In addition, she is the chairperson of the Infosys Foundation.

Post the launch, three students from the Shiv Nadar School also read out one story from the book while a couple of others simultaneously enacted the same. Ms Murthy also interacted with the students and answered their questions around the book and shared her views on children’s literature.

The book is published by Puffin (Penguin Random House India) and is available online and in all leading bookstores for Rs. 250/- only.